The U.S. has Fought Human Trafficking for 20 Years—How Much Progress Has Been Made?

Human trafficking cases have been reported in all 50 states and the District of Columbia. Individuals who entered the United States with and without legal status have been identified as trafficking victims.

Disclaimer: Fight the New Drug is a non-religious and non-legislative awareness and education organization. Some of the issues discussed in the following article are legislatively-affiliated. Including links and discussions about these legislative matters does not constitute an endorsement by Fight the New Drug. Though our organization is non-legislative, we do fully support the regulation of already illegal forms of pornography and sexual exploitation, including the fight against sex trafficking.

Did you know that until the year 2000, human trafficking technically wasn’t a federal crime in the United States?

Although FTND is not a legislative organization, this year’s annual Trafficking in Persons Report as mandated by the TVPA is important to discuss—particularly as it relates to global efforts to combat human trafficking and the biggest consumers of commercial sex.

The TVPA defines sex trafficking as a situation in which “a commercial sex act is induced by force, fraud, or coercion, or in which the person induced to perform such an act has not attained 18 years of age.”

Human trafficking thrives where people in vulnerable populations or circumstances can be preyed upon by those who seek to profit from their exploitation—be it monetarily, socially, or politically.

There are an estimated 4.8 million victims of human sex trafficking globally, with children making up around 21% of victims. An estimated 99% of global sex trafficking victims are women and girls, and the average age of a sex trafficked child is 15-years-old. And yet, some governments still deny the existence of human trafficking.

When the United States Congress passed the Trafficking Victims Protection Act 20 years ago, a national framework for the federal response to human trafficking was established based on three categories—prevention, prosecution, and protection.

The goal of the TIP Report is to raise awareness, spark dialogue, stir action, hold governments accountable for their contribution and response to human trafficking, and aid them in their efforts to combat it.

Tier classifications in the TIP Report

Each year, countries are ranked on a scale of four tiers based on the extent to which their efforts meet the TVPA’s minimum standards for eliminating human trafficking.

Tier 1. Countries with governments that meet TVPA minimum standards. Although this is the highest-ranking, this doesn’t mean countries here have no human trafficking problem or are doing enough to address it.

Tier 2. Countries with governments that are making significant efforts to comply with TVPA’s minimum standards but don’t yet fully meet them.

Tier 2 Watch List. Countries with governments that don’t meet TVPA minimum standards and for which “the estimated number of victims of severe forms of trafficking is very significant or is significantly increasing and the country is not taking proportional concrete actions.”

Any country ranked at Tier 2 Watch List for two consecutive years without demonstrating improvement is automatically downgraded to Tier 3.

Tier 3. Countries with governments that don’t meet TVPA minimum standards and are not making significant efforts to do so. May also include countries where the origin, transit, or destination of trafficking is severe, the government has been complicit with severe forms of trafficking, is not devoting sufficient budgetary resources to investigate, prosecute, and convict human traffickers or provide restitution or protection for victims, and adequate prevention measures are not being taken.

Here’s a snapshot of what the TIP Report revealed this year. 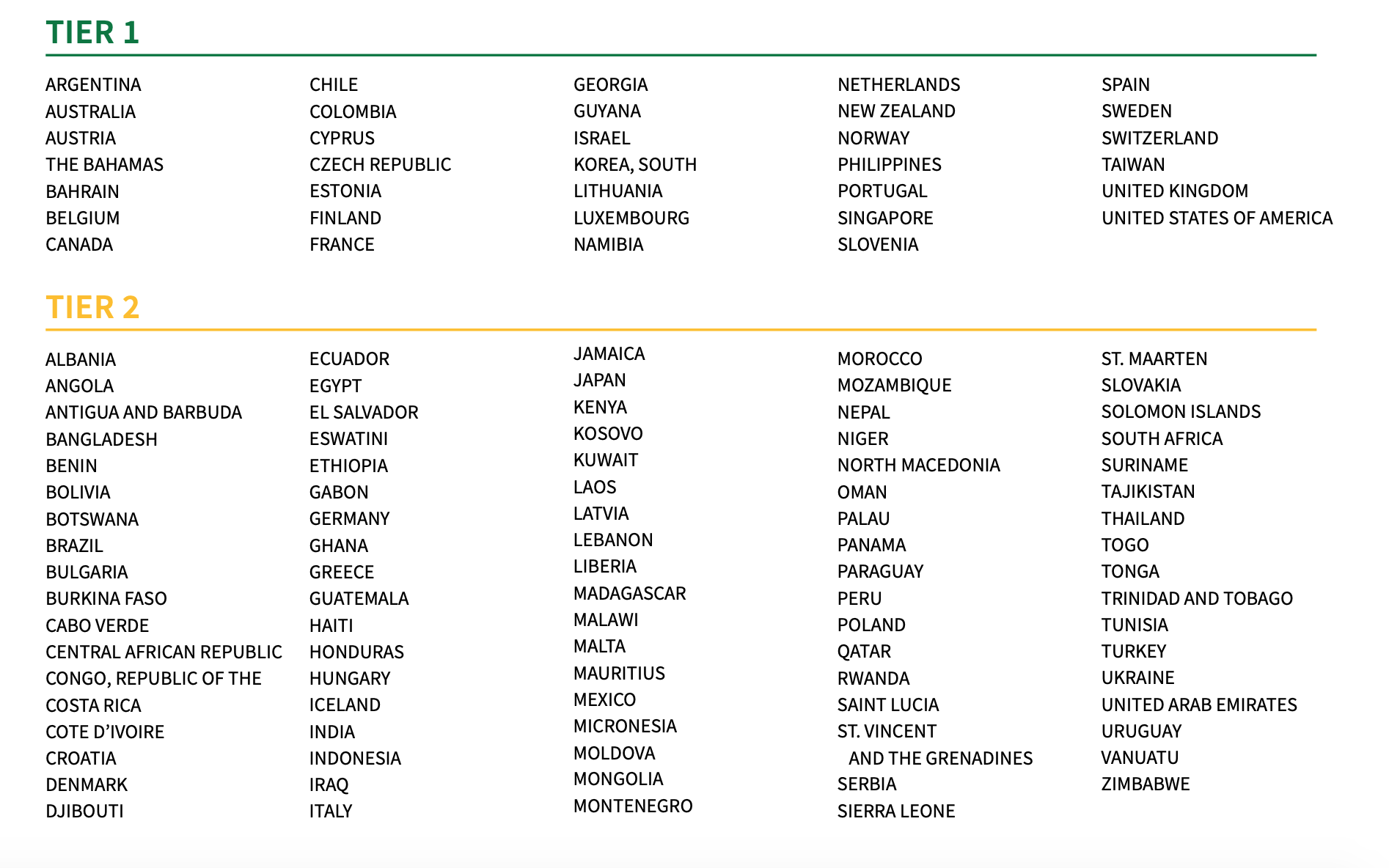 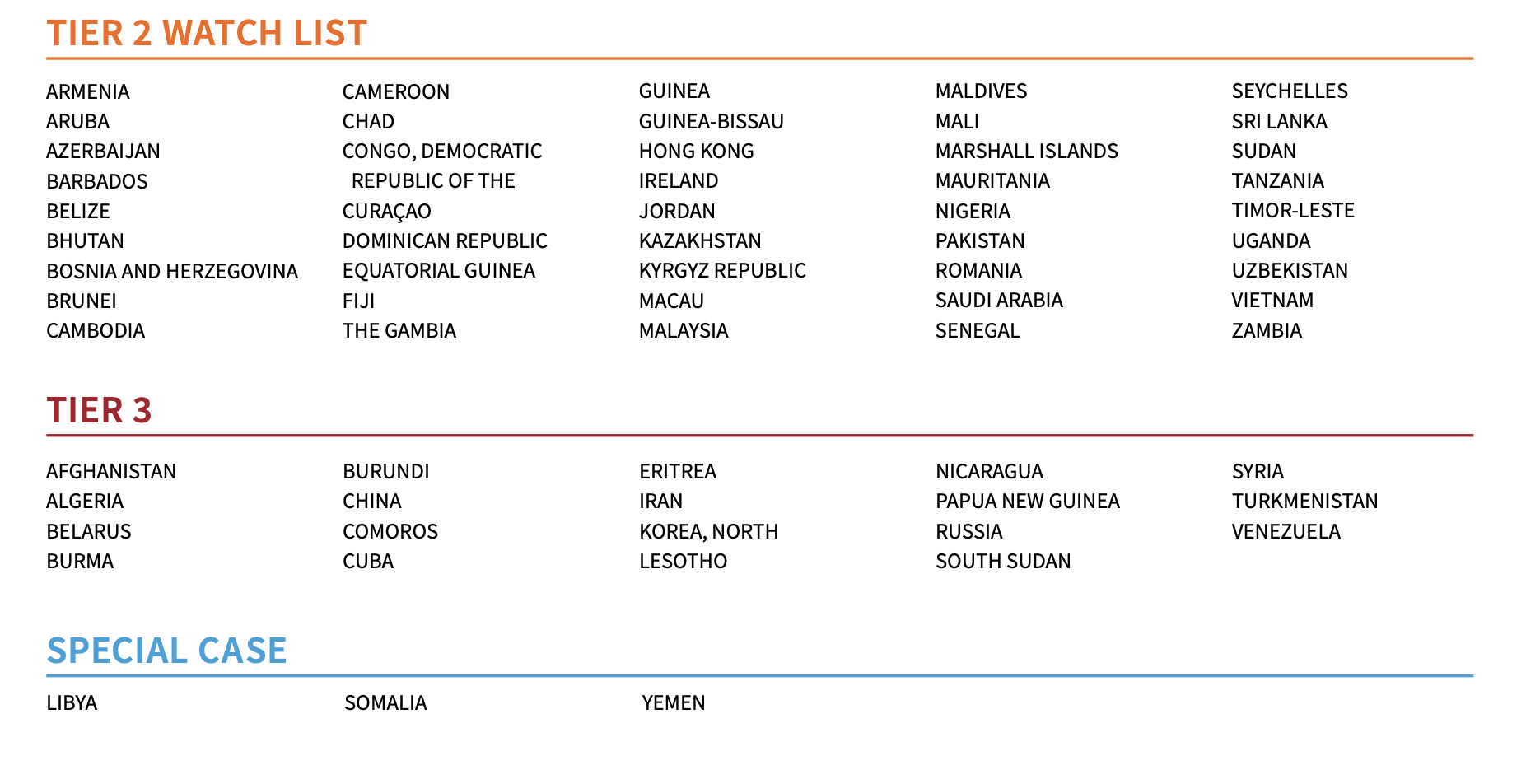 ***For a detailed breakdown of each region and country including a justification for tier rankings, check out the Country Narratives in the TIP Report.

How is the U.S. doing according to the TIP report?

The United States has been ranked Tier 1 since 2013 and did make some impactful efforts to fight human trafficking, but there’s still significant room for improvement—especialy given that the U.S. is still one of the biggest consumers of commercial sex.

Related: 10 Surprising Facts About Human Trafficking In The U.S.

The U.S. prosecuted fewer cases and secured convictions against fewer traffickers this fiscal year compared to last. And while the government did increase funding for trafficking victim assistance from the previous year, the number of victims served actually decreased.

Human trafficking cases have been reported in all 50 states and the District of Columbia. Individuals who entered the United States with and without legal status have been identified as trafficking victims.

Victims originate from almost every region of the world. The top three countries of origin of federally identified victims were the United States, Mexico, and Honduras.

Here are some of the successes in the U.S. for the last fiscal year:

And here are some of the prioritized recommendations as stated in the TIP report:

There’s clearly still a long way to go when it comes to addressing this complex issue.

Consider basic economics—the supply for any product simply wouldn’t exist if there wasn’t a demand for it. Think toilet paper, for example. In years past, the average person probably had no problem purchasing some when needed, but given the rise in demand amidst a global pandemic, many stores couldn’t keep TP stocked in the months of March – May this year. As a result, companies are mass producing it in an effort to meet the demand.

Related: How COVID-19 Has Worsened The Existing Issue Of Human Trafficking