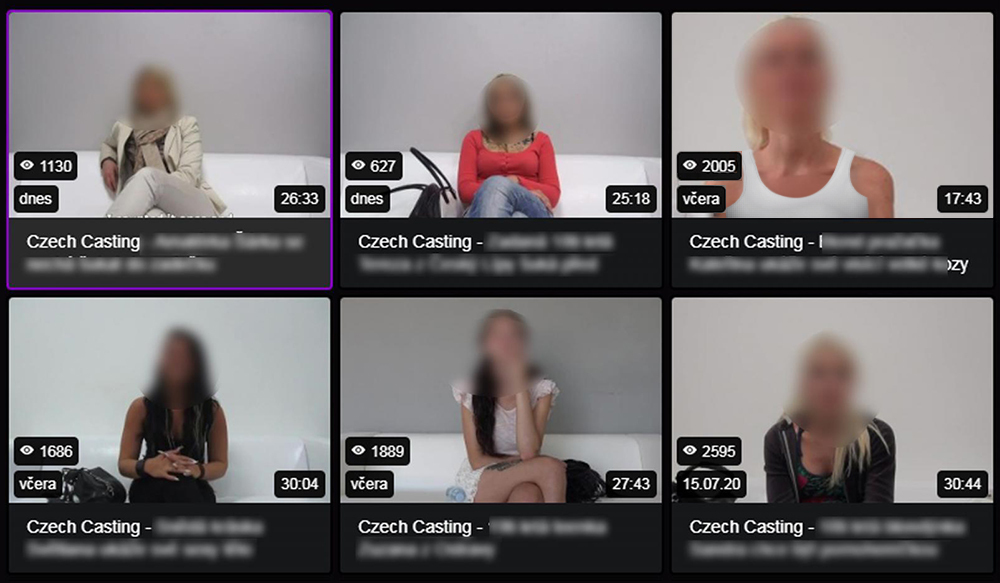 The videos under investigation in the Czech Republic were recorded from 2016 to 2019 and began as routine castings that later turn into sex with a cameraman, according to police. The company being accused is called Netlook, and it’s reportedly the largest producer of pornography in the Czech Republic.

Most of the alleged victims, eighteen of which have come forward so far to describe what happened at the castings, have been young female college students aspiring to be models or looking to make some extra cash.

They were tricked from the start

The women were promised a “comfortable start” in the fashion industry in an advertisement that looked like a casting call for models. They submitted online applications only to learn after the fact that the modeling job they’d hoped to do was actually a pornography shoot.

Police—who recently confiscated uncut recordings of the castings—say the girls were unfamiliar with the environment and wanted to leave, but were coerced or persuaded to have sex. This is sex trafficking, by definition.

According to the testimonies of the victims, they felt helpless as the cameraman physically forced himself on them, and they ultimately did as he coerced them. They also say the videos were edited to make it look like the girls wanted sex themselves.

The trafficking charges and impacts on survivors

The individuals are being accused of human trafficking, sexual coercion, and rape according to Jaroslav Ibehej, a representative from the National Centre.

“From 2013, there have been advertised job offers presented as professional modeling photography for women over 18, promising earnings ranging from CZK 1,000 to CZK 5,000. However, according to our investigations, it was just a pretext to manipulate the women to produce and distribute pornographic videos.”

According to Ibehej, the methods of coercion and manipulation were well thought out, planned, and executed. “They were bringing the women to the casting place, signing contracts for the casting, verifying the age of majority, and conducting professional interviews…Czech police is still in the process of identifying all the women recruited, filmed, coerced, and defrauded by this conspiracy.”

“Many of them have experienced mental and health problems, including long periods of medical treatment,” Ibehej says.

The Czech Casting channel is run by the Pragued based company Netlook—the largest producer of pornography in the Czech Republic.

Netlook lawyer David Bascheri denies all of the allegations—including that the girls were under any type of pressure or that any physical violence was used against them in filming.

“The women knew what they were getting into and signed contracts allowing the videos’ online distribution, and they knew the risks…They did everything voluntarily, no one manipulated them,” he said.

Bascheri offered the possible explanation that after the videos were filmed, the women changed their minds and turned to police. He also offered the justification that of the estimated 1,600 castings in recent years, the case was started by the testimony of only a fraction of the girls.

The recent GirlsDoPorn lawsuit is also very telling about the rise of this horrifying trend. In case you’re not up to date, here’s a quick refresher.

The producers of the site have been federally charged with sex trafficking.

Many of the trafficked women were drugged, fed alcohol, and coerced into signing lengthy contracts they didn’t understand. And although the women were promised they’d only endure 30 minutes of filming, in some cases, they were forced into performing sex on camera for 7 painful hours.

While justice is in the process of being served, the impact of this abuse in the lives of the victims has been tragic, and for many, irreparable.

Rethinking what it means to be a sex trafficked

While it’s significant and in many ways unprecedented for women to speak out about being exploited, trafficked, and abused like they have in recent years, the devastating truth is that the stories that are published are just the tip of the iceberg.

Think about it—some individuals are coming forward to share their stories, but how many remain suffering in silence?

The Trafficking Victims Protection Act—passed by a U.S. bipartisan coalition in the year 2000—clarified and changed perceptions about what really defines international human sex trafficking.

Defined by the TVPA as a situation in which “a commercial sex act induced by force, fraud, or coercion, or in which the person induced to perform such acts has not attained 18 years of age,” sex trafficking is often very different than what you might see from a scene in movies like “Taken.” In fact, sex trafficking can happen domestically, in our very own neighborhoods, and in every day situations—like showing up for a job interview or a casting call.

Related: The Dream Job This Makeup Artist Was Offered Was Really A Sex Trafficking Scheme

It would also be completely false to assume that consuming these types of fantasies has zero impact on the attitudes and behaviors of consumers.

So if there’s no way to know for sure, is clicking really worth it?