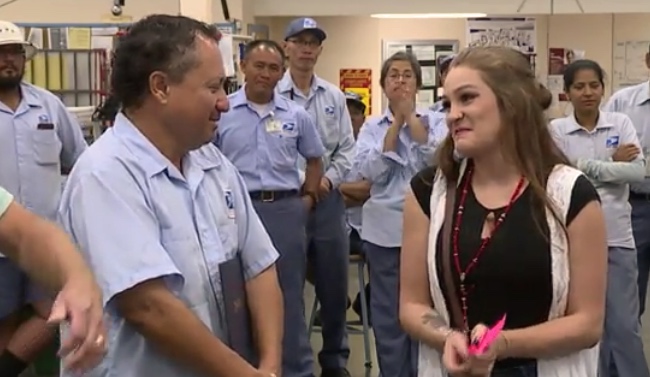 Header image from Fox40 coverage of this story. This post was originally shared in August 2018. 4-minute read.

June 8th, 2018, was a normal day for mailperson Ivan Crisostomo, who was on his regular postal route in South Sacramento, until he came across a distressing scene: a sobbing 16-year-old named Crystal Allen, hiding in someone’s front yard.

“I hear this crying, this desperate crying,” he said. “I saw her hiding behind this kind of bush, kind of tree.”

Allen had allegedly been trafficked for three months—drugged, tortured, and abused, not sure if she’d ever see her family again. The day Ivan helped her, her captors threatened her, put her in a car and started driving.

“They told me that they were taking me somewhere to hurt me and I kind of just thought I’d…jump out the car,” the teen told Fox40.

Crystal says she was able to grab her captor’s cell phone when she jumped out of the car. The first thing she did was call her mother.

“Until she handed the phone to Ivan and we spoke with him, we had no idea what was going on,” said Stacy Ohman, Crystal’s mom. “We had no idea where she was or anything.”

Crisostomo stayed with the girl until police arrived and took her to the hospital.

It’s unclear how Crystal was taken and who her captors were. Police worked to track down the traffickers, and Crystal went back home with her family.

How incredible is this story?

It’s becoming more and more possible for regular people to play an active role in the fight against sex trafficking and sexual exploitation. New technological developments and classic on-the-ground action are both important, but everyone’s involvement in making a dent on this issue is massively important. To help do our part, we’ve put together a list of ways that we can all be active participants in the global fight to end sex trafficking.

1. Don’t contribute to sexual exploitation with views or money

Sex trafficking isn’t always far away. It happens around the world, but that also means it can take place in our own cities, towns, and neighborhoods, so learning to spot the warning signs can help you identify victims and report them to law enforcement—just look at this story about a flight attendant helping a victim of trafficking, or an Uber driver who recognized the signs and reported trafficking to police. Because they listened to and observed what was going on around them, two lives were saved.

There are lots of red flags that can signal that a person is being trafficked. They can be fearful and anxious, unsure of where they are, seem to owe a large debt, show physical signs of abuse, and much more. Websites like the Polaris Project, Hope For Justice, Stop The Traffik, and the US Department of Health and Human Services all have extensive lists of red flags, and being familiar with them can help all of us identify and help trafficking victims even if we don’t anticipate encountering them.

Read up on the facts of how to spot a trafficking victim or trafficker at the sites, linked above. And if you think you’ve recognized a trafficker or a victim of trafficking, it’s important to notify the proper authorities as quickly as possible.

You can call local law enforcement, or notify the National Human Trafficking Hotline 24 hours a day by calling 1-888-373-7888. The hotline has handled over 150,000 tips since 2007, and is the best way to activate a response that can rescue a victim or identify a trafficker.

It won’t always be easy to fight, but it will always be worth it. Are you with us?