Portions of the following article were originally posted on NBC News, by Kalhan Rosenblatt. 4 minute read. Shelia Fedrick said she instinctively felt something was wrong the moment...

By Fight the New DrugJanuary 22, 2018No Comments

Portions of the following article were originally posted on NBC News, by Kalhan Rosenblatt. 4 minute read.

Shelia Fedrick said she instinctively felt something was wrong the moment she saw the girl with dirty blonde hair sitting in the window seat of aisle 10 on a flight from Seattle to San Francisco.

“The girl looked like she had been through pure hell,” said Fedrick, 49, a flight attendant working for Alaska Airlines. Fedrick guessed that the girl was about 14 or 15 years old, traveling with a notably well-dressed older man. The stark contrast between the two set off alarm bells in her head.

Fedrick tried to engage them in conversation, but the man became defensive, she said.

“I left a note in one of the bathrooms,” Fedrick said. “She wrote back on the note and said ‘I need help.'”

Fedrick says she called the pilot and told him about the passengers, and when the plane landed, police were waiting in the terminal.

It’s that kind of intuition that former flight attendant Nancy Rivard, founder of Airline Ambassadors, is trying to instill in airline staff across the nation as she trains them on how to spot the signs of human trafficking.

U.S. Immigration and Customs Enforcement arrested 2,000 human traffickers and identified 400 victims last year. Since 2009 Airline Ambassadors has been working to make sure that when a trafficker flies with a victim, the flight crew is trained to spot and report them.

Recently, Rivard and several of her colleagues flew to Houston to meet with approximately 100 flight attendants who volunteered for the Airline Ambassadors training session on how to recognize human trafficking. Over two days, former victims related their experiences to the flight attendants.

In-flight crews were taught to look for passengers who appear frightened, ashamed or nervous; people traveling with someone who doesn’t appear to be a parent or relative; and children or adults who appear bruised or battered. They’re also taught to notice if someone insists on speaking for the alleged victim, doesn’t let them out of their sight or becomes defensive when questioned. Victims sometimes appear drugged.

Learning To Pull Back

Airline Ambassador flight attendants say one of the hardest lessons to learn is to pull back when they suspect a victim is on board.

“We tell people not to try to rescue because you can endanger the victim and yourself,” Rivard said.

Flight attendants call the pilot when they suspect a human trafficking victim is on board. The pilot then calls ahead to the flights’ destination where authorities are notified to meet the plane.

“One part of our training, and it’s the difficult part, but once we report it, we’re supposed to let it go,” says Andrea Hobart, 36, an Airline Ambassador trainer and flight attendant with Alaska Airlines. “Even though it’s hard to let it go, you transfer it into the hands of the authorities and they’ll pursue the case.”

Airline Ambassadors has also taken the fight to Congress to push for regular, required flight attendant training on all airlines in the United States.

Airline Ambassador Sandra Fiorini, 69, testified before Congress in 2010 about trafficking she witnessed during her 42-year career as a flight attendant with American Airlines, including girls she suspected were trafficked after flying from Moscow to the United States under the guise of becoming actresses and models.

But Rivard and Fiorini continue to lobby Congress for better awareness training for flight attendants.

Until that happens, Rivard will keep traveling across the country teaching flight attendants how to be the eyes in the sky protecting human trafficking victims.

Not all of us are flight attendants, but each of us can do our part to know the signs of trafficking and speak up. It all starts with knowing what to look for. Websites like the Polaris Project, Hope For Justice, Stop The Traffik, and the U.S. Department of Health and Human Services all have extensive lists of red flags, and being familiar with them can help all of us identify and help trafficking victims even if we don’t anticipate encountering them. 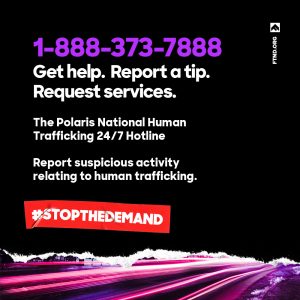