This article is also available in Spanish.
By Fight the New DrugMay 15, 2021No Comments 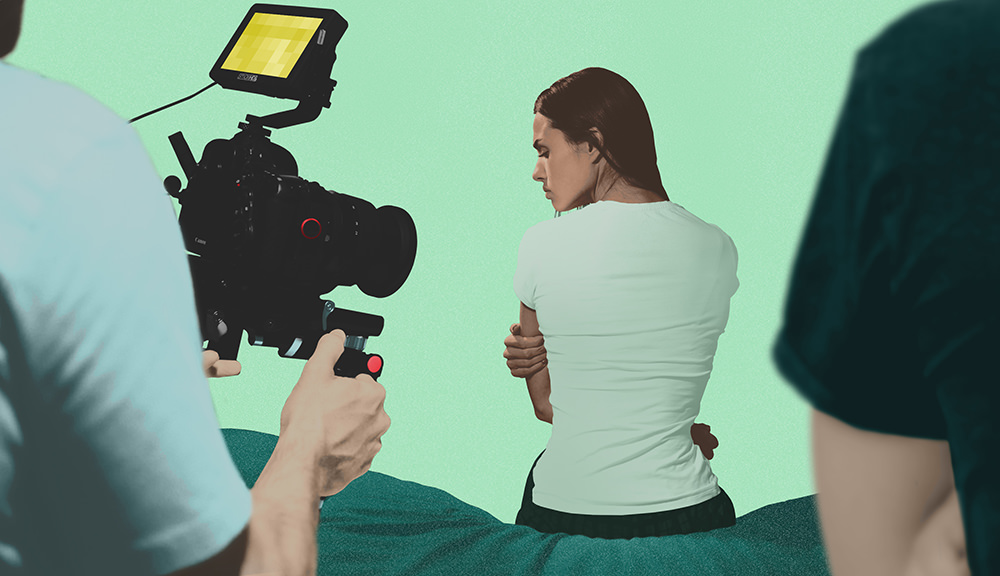 Sex trafficking is, by nature, an underground issue, which means that accurate statistics are difficult to come by. If anything, the numbers reflecting sex trafficking’s pervasiveness are likely higher than reports indicate. But regardless of the exact numbers, it’s important to remember that one person trafficked is one too many.

What, exactly, is sex trafficking?

The legal definition gets technical, but sex trafficking is a type of human trafficking, and human trafficking is exactly what it sounds like: buying or selling humans. It’s the purest form of objectification—the literal commoditization of a human being. The vast majority of human trafficking victims come from vulnerable populations, and of the approximately 24.9 million victims of forced labor, an estimated 4.8 million—about 19%—are trafficked for sex. Even more disturbingly, more than 1 in 5 sex trafficking victims—an estimated 21%—are children.International Labour Organization. (2017). Global estimates of modern slavery: Forced labour and forced marriage. Geneva: Retrieved from https://www.ilo.org/wcmsp5/groups/public/@dgreports/@dcomm/documents/publication/wcms_575479.pdfCopy  According to one report, of the domestic minor trafficking victims who had been forced into porn production, the average age they began being filmed was 12.8 years old.Bouché, V. (2018). Survivor insights: The role of technology in domestic minor sex trafficking. Thorn. Retrieved from https://www.thorn.org/wp-content/uploads/2019/12/Thorn_Survivor_Insights_090519.pdfCopy

Now, this is the part where most people start visualizing the Hollywood version of sex trafficking: young people being kidnapped while traveling in some faraway country, kept in chains and forced into selling sex. And yes, those stories do exist—they’re not only real, but they can be closer to home than you might imagine—but the “kidnapped victims” narrative does not reflect the reality of most victims’ experiences. Sex trafficking often involves psychological manipulation and often exploits the most vulnerable populations. In fact, according to a report of prosecuted sex trafficking cases in the U.S., 59% of coercive tactics used by traffickers were non-physical, compared to 41% of tactics involving physical coercion.Feehs, K., & Wheeler, A. C. (2021). 2020 federal human trafficking report. Human Trafficking Institute. Retrieved from https://www.traffickinginstitute.org/wp-content/uploads/2021/06/2020-Federal-Human-Trafficking-Report-Low-Res.pdfCopy

So while sex trafficking can happen to anyone from any background, those who are most vulnerable to trafficking include those living in poverty, those experiencing substance dependency, racial minorities, those who have experienced abuse or trauma prior to being trafficked, and runaway, homeless, or LGBTQ youth.Feehs, K., & Wheeler, A. C. (2021). 2020 federal human trafficking report. Human Trafficking Institute. Retrieved from https://www.traffickinginstitute.org/wp-content/uploads/2021/06/2020-Federal-Human-Trafficking-Report-Low-Res.pdfCopy Banks, D., & Kyckelhahn, T. (2011). Characteristics of suspected human trafficking incidents, 2008-2010. U.S. Department of Justice: Bureau of Justice Statistics. Retrieved from https://bjs.ojp.gov/content/pub/pdf/cshti0810.pdfCopy Xian, K., Chock, S., & Dwiggins, D. (2017). LGBTQ youth and vulnerability to sex trafficking. In M. Chisolm-Straker, & H. Stoklosa (Eds.), Human trafficking is a public health issue: A paradigm expansion in the united states (pp. 141-152). Cham: Springer International Publishing. doi:10.1007/978-3-319-47824-1_9 Retrieved from https://doi.org/10.1007/978-3-319-47824-1_9Copy

One survivor named Jose explained to us that when his family kicked him out of the house at age 16 after learning he is gay, the vulnerability of having no home or social support made him susceptible to the manipulation of traffickers and abusers who offered to take care of him. Coupled with the trauma he experienced from physical and sexual abuse during his childhood, Jose was so psychologically manipulated by his traffickers, he was not even aware he was being trafficked until long after the fact.Fight the New Drug. (2020). Jose’s story: I was sex trafficked through a massage business when I was a teen. Retrieved from https://fightthenewdrug.org/joses-story-underage-sex-trafficking-through-a-massage-business/Copy  As Jose put it, “for a long time I felt like, well, if my story isn’t like the movie Taken, then maybe I wasn’t trafficked. It took a long time for me to realize that what had happened to me was actually sex trafficking.”Jonsson, G. (Host). (2020, August 26). Jose: human trafficking survivor, public speaker, & activist. (No. 27) (Audio podcast episode). In Consider Before Consuming. Fight the New Drug. https://considerbeforeconsumingpodcast.com/jose/Copy

Unfortunately, some people listen to stories of victims being sex trafficked through the use of coercion and ask, “why didn’t she just leave?” or “why didn’t he just say no?” Firstly, it’s important to remember that trafficking is never the fault of the victim, and blaming the victim only adds to their trauma. Secondly, the fact of the matter is that the psychological manipulation used by traffickers can often be just as powerful—if not more powerful—as physical force.The United States Department of Justice. (2020). Child sex trafficking. Retrieved from https://www.justice.gov/criminal-ceos/child-sex-traffickingCopy

So if the “Hollywood” version is all you know about sex trafficking, then you’re only seeing one part of a much more complex picture. To understand that picture, you have to understand the Trafficking Victims Protection Act (TVPA).

In the year 2000, in response to reports of international human trafficking, one of the broadest bipartisan coalitions in history came together to pass the Trafficking Victims Protection Act, or TVPA.Trafficking Victims Protection Act (TVPA) of 2000, Pub. L. No. 106–386, Section 102(a), 114 Stat. 1464. https://www.govinfo.gov/content/pkg/BILLS-106hr3244enr/pdf/BILLS-106hr3244enr.pdfCopy  The landmark legislation identified “severe forms” of human trafficking, imposed harsh criminal penalties for offenders, and provided support systems for the victims.

Amended and reauthorized most recently in 2017, the Trafficking Victims Protection Act defines sex trafficking as a situation in which “a commercial sex act is induced by force, fraud, or coercion, or in which the person induced to perform such act has not attained 18 years of age.”Trafficking Victims Protection Act (TVPA) of 2000, Pub. L. No. 106–386, Section 102(a), 114 Stat. 1464. https://www.govinfo.gov/content/pkg/BILLS-106hr3244enr/pdf/BILLS-106hr3244enr.pdfCopy Trafficking victims protection reauthorization act of 2017, (2017). Retrieved from https://www.govinfo.gov/content/pkg/BILLS-115s1862enr/pdf/BILLS-115s1862enr.pdfCopy

If any one piece of that definition is present in a commercial sex act—force, fraud, coercion, or the participation of a minor—it’s automatically sex trafficking. While most instances of sex trafficking involve more than one aspect of manipulation, let’s break down that TVPA definition, piece by piece.

Victims who are under the age of 18

If someone is physically overpowered, drugged, or otherwise made to participate in a commercial sex act against their will or without their consent, they have been sex trafficked by force. Remember the example we used earlier about Jane Doe and GirlsDoPorn? Because the producers physically trapped her when she tried to run away, that automatically qualifies as sex trafficking by force.

It’s also important to note that there are many trafficking victims who are already being sold for sex, whose assaults are then filmed and distributed as pornography. One survivor named Jessa—who was trafficked by her family as a young child and into her adulthood—told us in an interview, “[I had] guns pointed at me and people telling me that if I didn’t keep doing what they told me to do that I would be shot. I was being raped, but I had a smile on my face. I had to act like I enjoyed it.”Fight the New Drug (2020). Jessa's Story: I Survived Being Sold Into Child Porn & Sex Slavery. YouTube, YouTube, 17 Mar. 2020, www.youtube.com/watch?v=pikvDbl31sU&t.Copy

Jessa had already been forced into sex trafficking, and was then filmed by her traffickers and abusers. Sexual abuse and sex trafficking are incredibly traumatic events to begin with, but when that trauma is filmed and distributed as pornography, the victims are re-traumatized over and over.

Compelling someone to participate in a commercial sex act by lying or tricking them qualifies as sex trafficking by fraud.

If someone is made to participate in a commercial sex act through the use of threats, manipulation, or intimidation, that is sex trafficking by coercion.

This means that a commercial sex act can be sex trafficking, even if no one was physically assaulted, and even if no one was tricked or defrauded. All it takes is coercion. The moment a victim is coerced, manipulated, or intimidated into participating in a commercial sex act, sex trafficking has occurred even if the victim receives a paycheck when it’s over.

“I was threatened that if I did not do the scene I was going to get sued for lots of money.”Hughes, D. (2010). Sex trafficking of women for the production of pornography. Citizens Against Trafficking, doi:https://www.academia.edu/4847671/Sex_Trafficking_of_Women_for_the_Production_of_PornographyCopy

“He told me that I had to do it and if I can’t, he would charge me and I would lose any other bookings I had because I would make his agency look bad.”Hughes, D. (2010). Sex trafficking of women for the production of pornography. Citizens Against Trafficking, doi:https://www.academia.edu/4847671/Sex_Trafficking_of_Women_for_the_Production_of_PornographyCopy

None of these quotes is from someone who was chained in a room. None of these quotes are from victims who were beaten into submission or held at gunpoint in some run-down brothel. Each of these performers went home at the end of the shoot and collected a paycheck. But does it really sound like enthusiastic consent? Or does it sound more like coercion?

Because pornography can so effectively normalize sexual violence, it can then set the stage for victims’ abuse, especially when consumers’ viewing habits and fantasies involve violence or other fetishes.Lanning, K. V. (2010). Child molesters: A behavioral analysis for professionals investigating the sexual exploitation of children. (No. 5). National Center for Missing & Exploited Children. Retrieved from https://www.missingkids.org/content/dam/missingkids/pdfs/publications/nc70.pdfCopy  Elizabeth Smart, who was kidnapped from her home at age 14, was regularly shown pornography by her captor before he would rape her. She explains, “He’d look at me and he’d be like, ‘Now we’re gonna do this…’ The things that these women were being photographed doing were things that I was being forced to do, and it was almost like they were setting the bar, setting the standard of what my captor was going to force me to do next… It almost felt like this pornography was my sentencing.”Brain, Heart, World: Episode 3, The World. Fight the New Drug, 2018. https://brainheartworld.org/Copy

In fact, many survivors who have been sold for sex report being shown pornography by their traffickers or buyers to illustrate what is expected of them. As one survivor named Lexie who was sex trafficked as a child explained, “Right before any time a customer was brought into the room, I would be shown pornography. And being that young, I think it translated for me as an overall thing, as a woman—this is what men expect from you, and this is what people want from you.”Fight the New Drug (2020). Lexie’s Story: “The First Time I Was Sold for Sex, I Was 11”. YouTube, YouTube, 29 April 2020, https://www.youtube.com/watch?v=zy2kR1zFwjQ.Copy

Remember that quote from Jane, at the beginning of the article?

“I didn’t know if they were going to kill me. Watching the video now, I can see it in my eyes. The quivering of my lips and my voice, I know exactly how I was feeling in that moment. But to anyone else who sees it, they see what they want and they think I was complicit.”Fight the New Drug. (2021). “I Didn’t know if they’d kill me”: What happened when this Jane Doe was trafficked by GirlsDoPorn. Retrieved from https://fightthenewdrug.org/what-happened-when-this-jane-doe-was-trafficked-by-girlsdoporn/Copy

As we discussed, modern sex trafficking shares a variety of symbiotic connections to pornography:

You can hate something. You can be outraged by it. But if you continue to sustain and engage with an industry that helps give it life, what is your outrage worth? Make it count—be a voice against sexual exploitation and help stop the demand for sex trafficking by refusing to consume pornography.