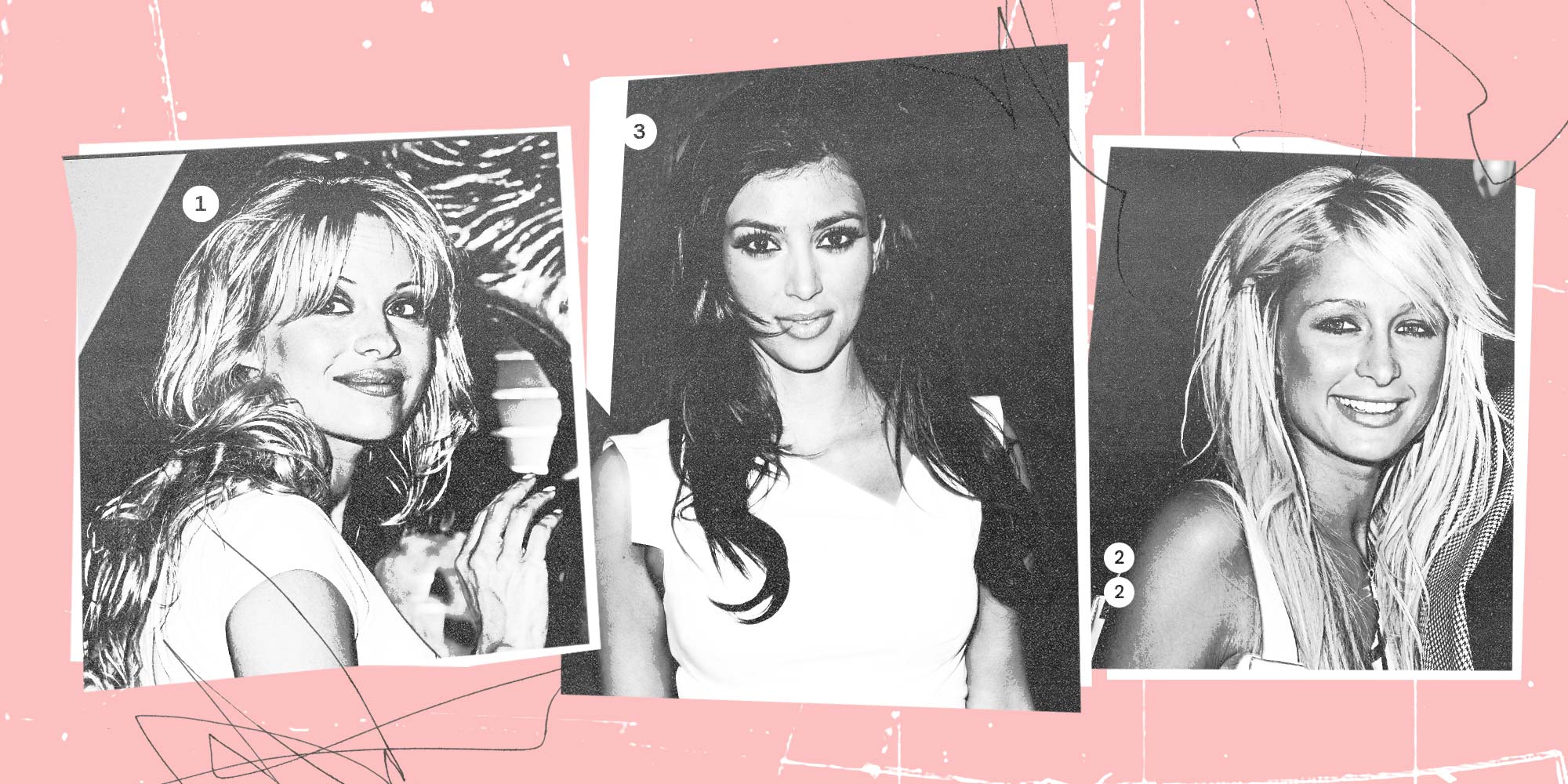 What do Marylin Monroe, Pamela Anderson, Paris Hilton, and Kim Kardashian all have in common?

There are many cases of image-based abuse that have become so sensationalized that people often write them off as “leaks” of ”sexy pics” or “sex tapes,” with the perception that these personal graphic images are free game and anyone’s right to see—especially if that person is a celebrity.

But in reality, these are actual instances of traumatizing abuse in the lives of real people.

Regardless of who is depicted in the photos or videos in question, though, research has shown that IBSA has a very serious effect on those who endure it. IBSA victims feel the same kind of mental health impacts and PTSD that sexual assault survivors experience.

Take, for example, Marylin Monroe—an iconic American actress, model, and singer who has also been notoriously sexualized in the public eye.

Long considered a “sex symbol” in our culture, did you know Monroe’s photos were used without her permission for the first-ever issue of Playboy?

“The first issue of Playboy launched with a nude photo of Marilyn Monroe, though journalist George Barris reported in Marilyn: Her Life in Her Own Words, that the photo was taken in 1948 when Monroe was broke and desperate for cash. Monroe was paid $50 by the photographer. Hefner later purchased the photo for $500 and used it in Playboy without Monroe’s permission…

…Beyond implications for individual creators and viewers, the dissemination of these images has implications for society at large. Sexually explicit content can perpetuate sexist ideas of sex and sexuality. Seeing women sexually objectified may make a woman feel as though that is what she has to do in order to acquire social capital.”

Related: What Exactly is “Image-Based Sexual Abuse,” and Why is it So Hurtful?

Playboy founder Hugh Hefner argued the photos in the magazine were emblems of women’s sexual liberation and female empowerment, but as many women who appeared in the magazine have since expressed, the fantasy he created did not allow for the consent of the women and led many to be more critical of their bodies and even suffer from anxiety, depression, and eating disorders.

Here are three other notorious examples of image-based abuse that society often glamorizes or overlooks.

Long considered one of the original viral “leaked” sex tapes, Pamela Anderson and Tommy Lee’s own intimate video was reportedly stolen and shared as an act of revenge.

Baywatch actress Anderson and Mötley Crüe drummer Lee were married from 1995 to 1998, and share two sons together. Events of their tumultuous marriage, including the infamous and unauthorized “leaking” of a sex tape that was recorded privately during their honeymoon, has received new hype with the airing of Hulu’s 2022 miniseries Pam & Tommy.

The tape was leaked by someone who allegedly wanted revenge specifically on Tommy Lee.

Six weeks after meeting on New Year’s Eve 1994, Lee accompanied Anderson on a photoshoot in Cancun, Mexico. Four days into the trip, the couple eloped. They returned home to Lee’s home in Malibu, which was undergoing renovations.

Lee allegedly fired several contractors without pay during that time, including electrician Rand Gauthier. Lee and Gauthier shared an intense confrontation when Gauthier returned to the couple’s mansion to get his tools. As revenge, Gauthier reportedly stole a safe from their garage which he later discovered contained several personal items, including intimate videos from Lee and Anderson’s honeymoon.

Three months after the tape was stolen, Lee and Anderson hired a private investigator who eventually led them to Ingley, but he deceptively said he bought it from the couple’s interior designer, Guerin Swing. The investigation later led to Ingley’s employee Steve Fasanella who made about $75,000 selling his own copies of the tape out of the trunk of his car, and finally, to Gauthier.

Anderson and Lee realized they couldn’t stop the rampant spread of the video, and in March 1996 filed a $10 million civil lawsuit against individuals they believed had a copy, and Penthouse magazine which published a written description of the tape.

Ingley relocated to the Netherlands, where he continued to sell and profit from the tape against court orders. Then, in 1996, copycat websites began selling their own duplicate copies of the tape.

Seth Warshavsky, a pornographer and founder of Internet Entertainment Group, had a website that featured early developments of pay-per-click advertising, video streaming, and online credit card processing, and capitalized on these resourced to sell the tape online. Anderson and Lee grew tired of trying to hold the responsible parties accountable, and ultimately settled with Warshavsky in November 1997.

They agreed to allow the tape to be shown on the internet but not sold in stores—a decision that would later prove to be a mistake, as they underestimated the power of the internet at the time. The tape soon saw thousands of sales per day.

Despite the settlement agreement, Warshavksy also worked with Steven Hirsch, the owner of Vivid Entertainment, to manufacture and sell the tape in adult video stores—selling hundreds of thousands of copies within a few short years.

Anderson and Lee sued Warshavsky in federal court in 2022, and he was ordered to pay them $740,000 each—but has yet to follow through.

Related: Why Hacked Celebrity Nudes are Just Another Form of Sexual Exploitation

Ex-boyfriend releases sex tape with Paris Hilton to the public

Another popular survivor of IBSA is Paris Hilton, who has endured years of abuse and harassment due to a nonconsensually shared private video.

Hilton, a Hilton hotel heiress and reality tv star, was just 19 years old in 2001 when she made an intimate personal recording with her then boyfriend. Two years later, her life changed forever when the video titled 1 Night in Paris was released to the public—causing a media sensation.

To this day, she claims she “never made a dollar” from the infamous video.

Her ex-boyfriend, poker player Rick Salomon—who was coincidentally married to Pamela Anderson twice, in 2007 and again in 2014—leaked the tape online in 2003. The couple were still dating at the time.

In 2018, Paris revealed how she feels about the sex tape in the documentary The American Meme.

“I felt like everyone on the street was laughing at me,” she said. “I literally could not walk down the street because I felt like every single person had watched it and seen me naked and was talking behind my back. It was like being raped. It felt like I’d lost part of [me] and been talked about in such cruel and mean ways. I literally wanted to die at some points.”

She also told the Telegraph in 2014, “It was devastating because that was someone I was with for a few years. I don’t think I’ll ever be able to fully trust any man again after that. It was just the most hurtful and awful thing that anyone could do to a little girl. I was very young, it wasn’t my fault.”

Paris, now 40 years old, told Vanity Fair in 2021 that the aftermath of the sex tape has left her with PTSD.

“That will always be something that will hurt me for the rest of my life. It’s always there in the back of my mind. When it happened, people were so mean about it to me,” she said. “The way that I was spoken about on nightly talk shows and the media, to see things with my family was just heartbreaking. I would be in tears every single day, I didn’t want to leave my house, I felt like my life was over.”

“It was a private experience between two people. You love someone, you trust someone and to have your trust betrayed like that and for the whole world to be watching and laughing…It was even more hurtful to me to have these people think that I did this on purpose—that killed me. It still gives me post-traumatic stress disorder to talk about it.”

Some speculate that back when the tape was filmed, Kardashian wasn’t the megastar she is today—and that its release was what triggered her fame.

Disclaimer: there is a lot of conflicting info about the release of this particular tape. Regardless of the initial circumstances of its release, true consent can be revoked at any time.

There’s obvious controversy over how and by whom the video was leaked, but Kardashian faults TMZ, and filed a lawsuit in 2007 against Vivid Entertainment for its distribution along with this statement:

“This tape… which was meant to be something private between myself and my then boyfriend is extremely hurtful not only to me, but to my family as well. I am filing legal charges against the company who is distributing this tape since it is being sold completely without my permission or consent.”

In 2002, the 22-year-old heiress to her father, the late lawyer Robert Kardashian, was the personal stylist of singer Brandy Norwood—which is how she met and started dating Brandy’s younger brother, Willie “Ray J” Norwood.

In October of that year, the couple traveled to Cabo, Mexico, to celebrate Kardashian’s 23rd birthday. During their trip, they filmed themselves together, including having sex, with a handheld camcorder.

Their relationship eventually ended, and by 2006, Kardashian started gaining recognition in Hollywood as a friend to reality star Paris Hilton and celebrity stylist. In the months leading up to the sex tape “leak,” some speculate that Kardashian pulled several stunts in attempts to get recognized in Hollywood.

Kevin Dickson, former editor at In Touch Weekly, claimed Kardashian reached out regularly trying to get coverage from the news outlet. She was spotted on Paris Hilton’s MTV reality show The Simple Life, but Dickson said they took it a step further by orchestrating Kardashian to be the first girl Nick Lachey was spotted with after his split from Jessica Simpson.

Kardashian’s lawyer, Marty Singer, insists that she has never tipped off paparazzi or planted stories about herself in the tabloids.

Kardashian sued Vivid Entertainment and tried to prevent distribution of the video, but eventually settled out of court.

Vivid Entertainment’s founder and co-chairman Steven Hirsch said, “Ultimately she did sell us the footage so we had the ability to put it out and distribute it…I can only say that it’s the most popular tape we’ve ever done… Revenue-wise it has generated more income than any other tape that we’ve done.”

A few months later, E! announced the debut of the now iconic reality series, Keeping Up With the Kardashians.

“Leaked” sexual content, although often widely accepted as harmless entertainment, is simply another real form of sexual exploitation. This is a significant societal issue with devastating impacts—for celebrities, average people, and everyone in between.

Putting a stop to sexual exploitation starts with acknowledging it in all its forms, speaking out about its harms, and working to stop the demand for content that can hurt the lives of those in it and those who consume it.