By Fight the New DrugJanuary 30, 2020No Comments

It happened so subtly in my life that I didn’t know what hit me. But I do remember that at 15 years old, it had already clenched its jaws into me and took a strong hold.

The more I watched, the more it dulled my senses and skewed my vision of the world to the point that I just didn’t care about anything. It became such a habit in my life that I would use it to even help me sleep at night. It led to out of control emotions, erratic behavior and self-harm in the form of cutting.

I hated it, but I couldn’t stop

The second semester of my freshman year of college I met a guy who was a “good guy,” and in my mind, I still considered myself a decent person. So, I decided that it was time to grow up, change my life, and drop my party lifestyle in order to be with him. I stopped drinking, smoking, cussing, the promiscuity, I stopped it all and he began to like me. I was happy, but the one thing that I could not seem to drop was the porn. No matter how much I tried, it gripped at the core of me. The more I fought, the more it clung to me.

I came to realize that this wasn’t “normal” anymore, but I felt trapped and alone. I couldn’t open up about it. I would tell myself that no one would understand and I would lose friends if they knew. I definitely felt like this wasn’t a problem women struggled with, because that’s what society told me. I knew I was alone in this and I told myself that I could figure it out on my own. I would go a week or maybe even two being porn-free. I would feel refreshed and good about myself, but usually at night when I couldn’t sleep I would find myself going back to it and I would fall right back into the same pattern.

Everything had finally caught up with me. It led once again to another failed relationship and for two more years I lived like this. Happy on the outside, but suffering quietly on the inside.

Suffering in silence, and shame

After choosing to release my private shame and lay down the burden I carried, I am now three and a half years free from pornography and have never looked back. Since breaking free, there has been an abundance of healing, love, and forgiveness in my life. I now get to hold fast to love and feel its true meaning.

Pornography is not something to be taken lightly. Many people suffer in it longer than they need to because of shame. Just because the world says it is “normal” doesn’t mean we must let it be.

People don’t see what it does in the heart and mind of those that it affects. They don’t see what it does inside the homes and relationships of those that it holds captive. They don’t see the lives that it ruins and destroys. But many of those struggling, especially women, feel that people would say “oh, that’s normal” or “you’re disgusting” if they knew. So, we stay trapped and we let it consume us.

No fear and no shame 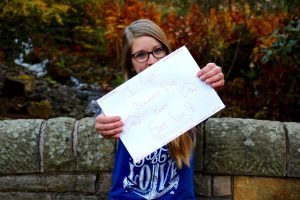 Not only is all of this untrue, but these feelings of shame can also cripple people’s self-esteem and stunt their progress. And we realize this is a complex issue, since remorse can be a healthy part of finding freedom and healing wounds. But too often, shame is used as a beating stick that weakens and demoralizes instead of strengthens and motivates.

By choosing love and understanding, instead of shame, we are helping to promote true change in this porn-saturated society. Continue to spread the word that pornography is harmful to individuals, relationships, and society in a way that will inspire and motivate others to choose love, too.

We are proud of Keeley and her vulnerability in opening up about porn’s impact on her life. This is what the fight is all about: exposing the harms of pornography and shining a light on the hope that exists in real love that’s free from shame.