As the amount of pornography produced increases and becomes more normalized, the intensity of the degradation it portrays does, too.

By Fight the New DrugFebruary 1, 2022No Comments

This post was originally published on MerionWest.com. It has been reposted with permission from the author and edited for content and length. 9-minute read.

By Robert Jensen, Ph.D., University of Texas at Austin

“Is this likely to help people create and maintain stable, decent human communities that can remain in a sustainable relationship with the larger living world?”

In one of my books, this is a simple question I suggest when we are to evaluate a political project or a social practice. As we deal with today’s multiple, cascading social and ecological crises, the kinds of problems that make the fate of the human species uncertain, even in the short term—we should challenge ourselves with that question.

Of course the world is complex, and we have limited capacity to predict the consequences of our actions, so there rarely are easy answers to that question. It can be challenging to figure out which social practices will benefit society and ecosystems over the long term and which will cause unacceptable harm. But in some cases, it is easier than others to make that assessment.

For me, it is straightforward when evaluating contemporary pornography, the graphic sexually explicit material that saturates the culture.

What do I mean by pornography? Some discussions get off track early by treating pornography as an abstraction and using overly expansive categories such as “sexual expression.” So, to be clear, today we are talking about the graphic sexually explicit material that:

Is this pornography helping people create and maintain stable, decent human communities? Is this pornography fostering the kinds of relationships, both intimate and communal, that help people cope with the challenges of everyday living?

My unequivocal answer is no.

I want to explore this conclusion by asking why pornography is so prevalent, why themes of domination and subordination are so prevalent in pornography, and why so many people defend or celebrate it.

That advice may seem rather obvious to many of us. Why would an educator find it necessary to offer a warning about these particular sex acts? Where would young men get the idea that such acts are appropriate intimate activities?

Humans likely have used their creative capacities to explore the power of sexuality in art for as long as we have been making it.

But a profit-driven pornography industry devoted to selling graphic, sexually explicit material is a new phenomenon, and the forms it takes are not merely an extension of pre-historic cave paintings.

It is tempting to focus exclusively on the role of the internet, which is today the primary vehicle for delivering pornography and has made pornography dramatically more accessible, including to children who only need to lie about their age when asked in order to access this material. But the analysis I am presenting applies not just to pornographic websites but a wide range of graphic sexually explicit material, including “old-fashioned” pornography magazines.

Although a wide variety of pornographic images is available, the dominant theme in heterosexual pornography is men controlling women, men directing women to perform sexual acts that men desire, even if those acts are uncomfortable or painful for women.

Pornography also provides a sexual experience that requires no vulnerability on the part of the viewer. Sexual activity in real life with a partner, even when there is no expectation of an ongoing relationship, involves some level of emotional exposure.

In the experience of sexual pleasure there often is real intimacy, an opening up to another person. In such moments, another person can see us, sometimes in ways we do not want to be seen.

Pornography provides the pleasure without that vulnerability. For men who are trained to fear vulnerability and therefore are uncomfortable with emotional intimacy, pornography provides the illusion of a human connection without emotional engagement. There is no need to negotiate a complex, often messy, sometimes distressing relationship with a real person. Digital technologies never say no to their users, and the female performers in pornography never say no to male viewers.

What are the effects of the use of pornography, especially habitual use? That inquiry is sometimes reduced to the question, “Does pornography cause rape?” As with most attempts to establish links between mass media and violence, there is no simple answer to that question. That is especially true in a society in which rape is so common that both rapists and rape victims often will self-report actions that meet the legal definition of rape without labeling the experience as rape. Rather than make definitive causal claims, I suggest we consider ways that pornography might change how people understand what constitutes rape, and the ways that pornography makes rape inviting.

Evidence also comes from women’s reports. I have had many conversations with heterosexual women who said that male partners who habitually used pornography often withdrew from sexual intimacy in the relationship as pornography dominated their sexual experience, while other women have reported that male partners began to demand sexual acts that were uncomfortable or painful. That should lead us to consider not only why so many men use pornography, but what kinds of images they are viewing.

Even if there were no connection between the use of pornography and the cultivation of attitudes, and no effects of changed attitudes on behavior—and there is evidence to believe those connections exist—we should still ask why pornographic images look the way they do.

A wide variety of pornography is available, and one can find most any type of graphic sexually explicit material through a simple web search. But that diversity of images should not distract us from recognizing patterns in those images. The primary dynamic is male power and domination along with female subordination and submission, but any inequality dynamic that exists has been sexualized in pornography.

Pornography eroticizes not only male domination and female subordination, but other forms of power and inequality.

One example is the pornographic genre called “interracial,” which has expanded in the past two decades. Films in this category can feature any combination of racial groups, but virtually all employ racist stereotypes (sexually animalistic black women, demure Asian women who love serving white men, immigrant women at the border who are easily exploited) and racist language.

One of the most common interracial scenes is a white woman being penetrated by one or more black men, who are presented as being rougher and more aggressive. That draws on the racist stereotype of black men as a threat to the “innocence” of white women, while at the same time asserts that the white woman is this promiscuous type who seeks such defilement.

More recently, there has been an increase in what my friend Gail Dines calls “pseudo-child pornography.” Sexually explicit material using minors is illegal and is vigorously prosecuted, and so mainstream pornography usually stays away from actual child pornography, or what is now called child sexual abuse material.

Still, the industry routinely uses young-looking adult women in childlike settings to create the impression that an adult man can have sex with the high school girl of his fantasy. This material is not marketed specifically to pedophiles but is part of the mainstream pornography market for “ordinary” guys.

The Paradox of Pornography

This leaves us with what in my book Getting Off: Pornography and the End of Masculinity I called the paradox of pornography. In my adult life, two trends are uncontroversial to observe: First, pornography has become more widely available and accepted. Second, the pornography industry has steadily produced images that are more overtly cruel and degrading to women, as well as more overtly racist than ever before.

As the amount of pornography produced increases and becomes more normalized, the intensity of the degradation it portrays does, too. That seems to be a paradox.

In a civilized society, how can a media genre become more mainstream at the same time that it becomes more misogynist and racist? If pornography is increasingly cruel and degrading, why is it increasingly commonplace?

As is often the case, this paradox can be resolved by recognizing that one of the assumptions may be wrong. How civilized a society are we? How much do we really care about the principles that we claim to hold around dignity, equality, and solidarity? How much do we care about those principles when they would interfere with our pleasure? Those are troubling questions, especially for those of us living in the privileged sectors of affluent societies.

This paradox should lead us to wonder why it is so easy to turn away from the exploitation of others. It should lead us to recognize that digital media are not only an exciting new way to tell stories but also can cut us off from our own inner life, from other people, and from the larger living world.

I will end with more questions that I think should trouble us.

I pose these questions specifically to men:

Do we value easily obtainable sexual pleasure more than we value the physical and psychological well-being of women?

Before we try to avoid the question by saying, “Well, women choose to perform in pornography,” let us face a more important question:

Why do we choose to use women in pornography for our own pleasure?

I pose these questions to us all: If we defend or embrace the pornography industry, can we really expect to create and maintain stable, decent human communities that can remain in a sustainable relationship with the larger living world? Are pornography and the other sexual exploitation industries consistent with a world defined by social justice and ecosystem health?

The world is not simple. But for me, this question has a simple answer. No. 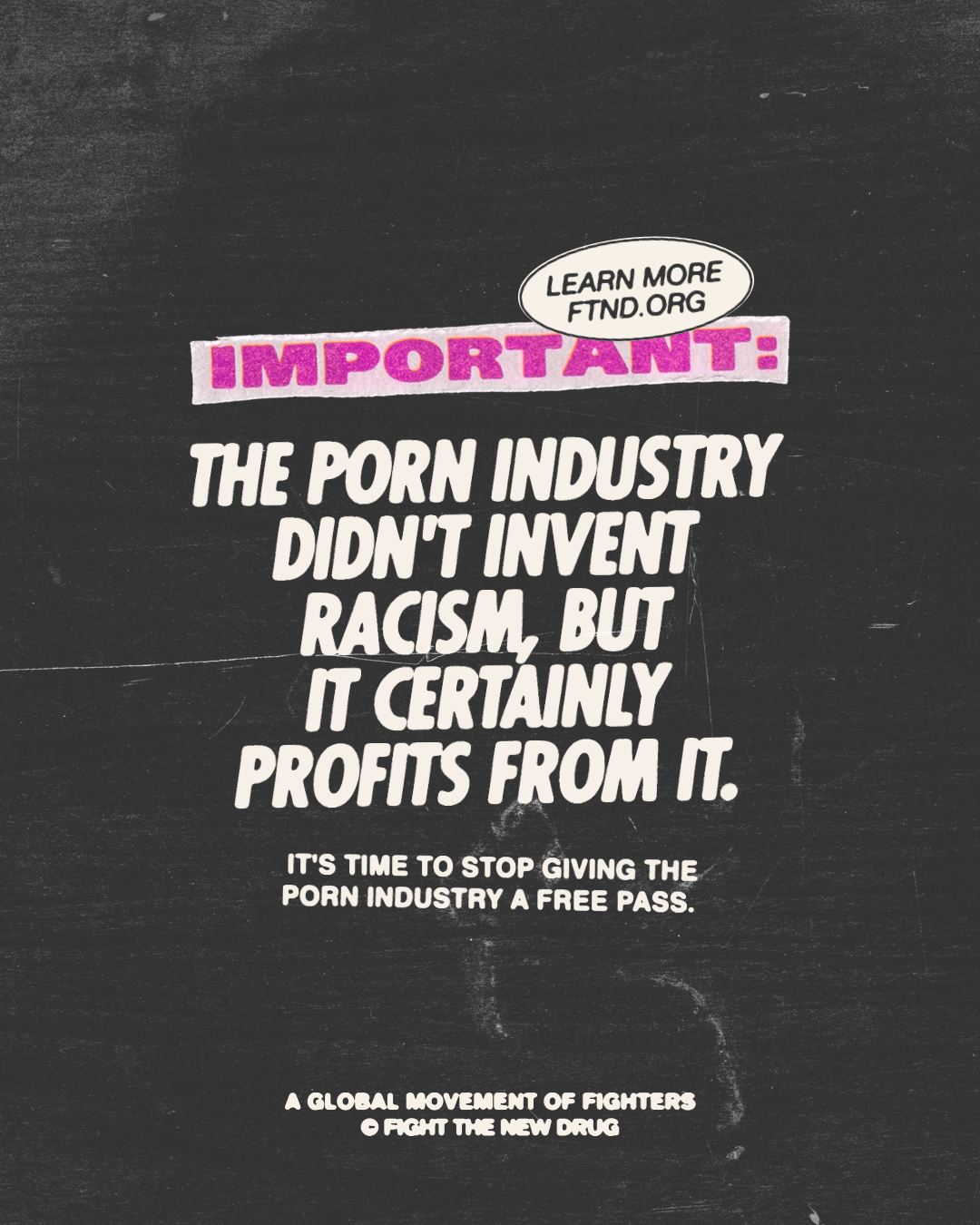 Dr. Robert Jensen is an Emeritus Professor in the School of Journalism and Media at the University of Texas at Austin and a founding board member of the Third Coast Activist Resource Center. He collaborates with the Ecosphere Studies program at The Land Institute in Salina, Kansas.

This essay is based on a presentation delivered by the author at the online conference on Interpersonal Violence Interventions—Social and Cultural Perspectives at the University of Jyväskylä in Finland on June 10, 2021.