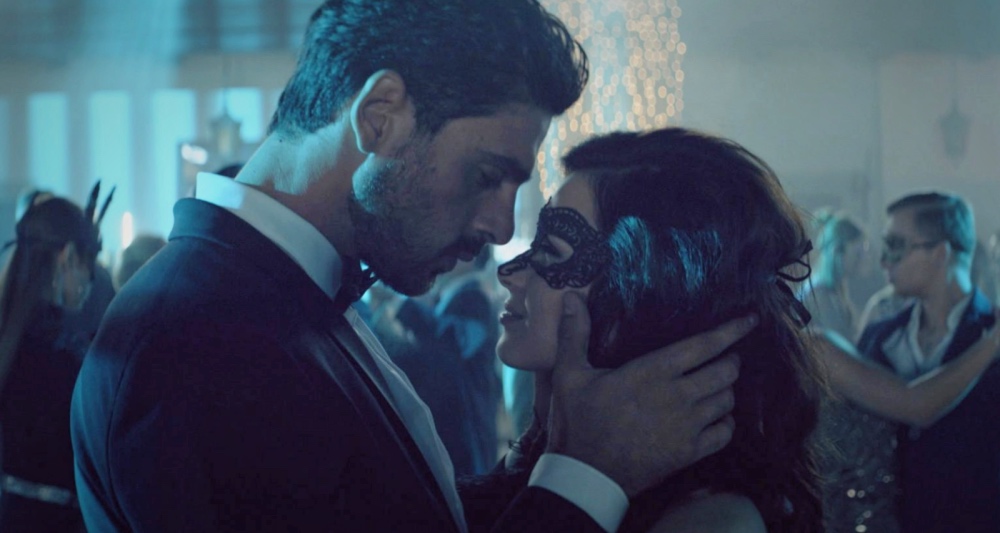 Move over, Fifty Shades of Grey franchise. There’s a new explicit movie on Netflix, and it’s topped the charts as the most-watched film on the platform after debuting on June 7th.

But before we get ahead of ourselves in breaking down a few reasons why 365 Days is more than a little problematic, let’s go over a brief overview of the story for context.

An adaptation of the first book in a trilogy by Polish author Blanka Lipińska, 365 Days follows hotel marketing executive Laura as she celebrates her 29th birthday in Italy. While there, she’s kidnapped by a dominating and dangerous member of a Sicilian mafia named Massimo, and he holds her captive against her will. Massimo tells Laura he’s been obsessing over her for the last 5 years after he saw her once on a beach the day his father was assassinated—and he’s wanted to make her “his own” ever since, and will kill her parents if she doesn’t comply. He gives her 365 days to fall in love with him, and if she doesn’t, he’ll supposedly set her free.

Spoiler alert: it only takes Laura a couple of weeks to fall in love with Massimo, and within two months, she’s pregnant and they’re engaged to be married. But from the time he captures her to the time the movie ends, he physically and sexually assaults her and does everything from claiming her as his property to victim-blaming her when she’s assaulted by another guy. Dreamy, right?

There are more than a few extremely graphic movies and TV shows out there, and as an anti-porn and pro-love movement, there aren’t enough hours in the day for us to review all of them. 365 Days stands out to us specifically because of its insane popularity among teens coupled with extremely problematic messages relating to sex, relationships, and love.

Here are just a few of those toxic messages.

First thing’s first—we have to talk about the abusive relationship between the main characters.

Ever heard of Stockholm syndrome? According to Encyclopedia Britannica, Stockholm syndrome is a psychological response wherein a captive begins to identify closely with his or her captors, as well as with their agenda and demands. It’s named after a botched bank robbery in Stockholm, Sweden in August 1973. Four employees of Sveriges Kreditbank were held hostage in the bank’s vault for six days, and during the standoff, a bond developed between captive and captor. One hostage, during a telephone call with the Swedish Prime Minister, stated that she fully trusted her captors but feared that she would die in a police assault on the building.

What makes Stockholm syndrome problematic? According to Healthline.com, many psychologists and medical professionals consider Stockholm syndrome a coping mechanism, or a way to help victims handle the trauma of a terrifying situation. Indeed, the history of the syndrome may help explain why that is.

In other words, Stockholm syndrome isn’t really love, even though it’s portrayed as something extremely romantic and passionate in 365 Days. It is not a sexy love story, it is abuse. And it’s irresponsible to glorify it as anything else.

While Laura fought and tried escaping in the beginning, by the end, she tells her best friend she’s fallen in love with her captor.

Stockholm syndrome can give the captor expanded power over the captive, which is exactly what happens with Massimo and Laura. Their bond isn’t founded on healthy shared ideals like consent, mutuality, and equality, but something incredibly toxic: possession and his power over her. In the film, Massimo keeps telling Laura, “You will be mine, I guarantee it.” He treats her like an object to be owned, not a person to be cherished and respected, despite what he says otherwise or “sweet” moments when he is very minimally decent or humane toward her.

Related: What You Won’t Read In “Fifty Shades:” Where To Go For The Best Sex Tips

Is this love, or is this the glorification of an abusive relationship packaged within a catchy soundtrack, explicit sex scenes, and cool Italian vistas?

We’ll spare you the details, but this movie is very far from family-friendly. But don’t let this be a selling point for the film and its inevitable upcoming sequels.

You might be asking what’s the big deal is, though. There are literally tons of graphic shows and movies out there, right? What makes this one stand out from the rest?

And did we mention that the most porn-inspired scenes from 365 Days are viral on TikTok, inspiring teens to film themselves reacting to the graphic content?

In short, as Roisin O’Connor writes for The Independent, “There are so many things wrong with this film.”

In our porn-obsessed culture, it’s no wonder our culture is obsessing over it instead of discussing the manipulation, abuse, and assault that are marketed as a scintillating fantasy.

Related: A Man Says He Fell In Love With This 20-Year-Old Model, Then He Kidnapped Her

After he kidnaps Laura, he tells her he won’t “touch her without her permission,” but breaks that promise multiple times in demeaning and aggressive ways. Massimo’s character doesn’t shy away from strangling Laura when he’s feeling dominant, and that’s a problem. But even more problematic is that these things don’t stop her from falling in love with him, despite all the red flags and abuse.

“I won’t touch you without consent.” Next scene? Sexual assault.
Verbal threats. Physical violence. Stockholm syndrome. Kidnapping. The whole shebang. It’s great if you don’t listen to any dialogue and skip to nothing but the actually consensual scenes. In short; I turned it off

But which scenes are truly “consensual” when you’re talking about a kidnap victim and her captor?

Think about it this way: if Massimo was unattractive and poor, this movie would be a horror flick instead of a sexual fantasy.

Because he’s portrayed as a sexy, domineering, and an extremely rich gangster, it basically excuses his possessiveness, violence, and manipulative behavior as being romantic. In response to the movie, many people have commented on the actor’s social media, asking him to “kidnap them.” But the reality is, being kidnapped and forced into a relationship you don’t want to be in at the risk of having your family killed isn’t a fantasy, it’s a nightmare.

Related: There’s No Room For “Fifty Shades” In A #MeToo World

Force, fraud, and coercion are actually the nightmares for so many people who are trapped in sexual exploitation.