I Volunteered With Sex Trafficking Survivors in Nepal, and Here’s What I Learned 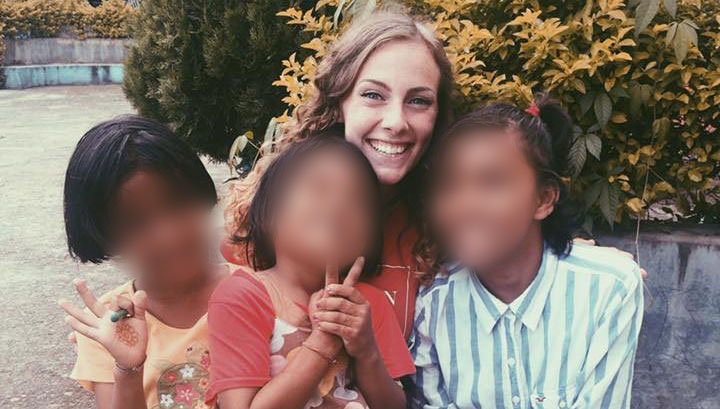 This post was written by the #StopTheDemand winner from 2017. Click here to find out how you can go to Nepal with HELP International like Taylor did.

If you were like me, you may have been writing this phrase all over posters, social media posts, and even stop signs this May. I was one of the many who participated in FTND’s #StopTheDemand awareness campaign and was fortunate enough to win the grand prize: a trip to Nepal with Help International. The program ran for two weeks this August and was one of the most eye-opening experiences of my lifetime. Here are a few photos of my time there:

We worked with an organization called Raksha Nepal to help empower and fight for survivors of sex trafficking and sexual assault in Nepal. Our team stayed at their shelter, which is home to 50+ girls, and got to see first hand how intricate and devastating some of these cases can be. But, the shelter is only one of the many programs they run. They also teach vocational courses for prostituted people to provide them with skills that will enable them to pursue their own dreams, partner with other NGO’s for disaster relief and gender equality, coordinate with lawyers to handle legal situations through all of it, just to mention a few.

Yeah. The amount of good they do is quite a mouthful, and almost overwhelming.

Trafficking and assault are issues that have to be fought every second in Nepal, and although some justice has been served, there’s still a long way to go. On paper, it may it seem like everything is dandy on the government side of things, but bribes are taken easily and those of higher castes have no desire to help the lower castes. A birth certificate is not considered valid unless signed by the father, and education systems only accept valid birth certificates, meaning that children of prostituted women will likely never receive the education they deserve, and many women stay in abusive relationships just to provide education for their kids.

These children, along with many others who never receive proper education, then flee to the city to find work and end up exceptionally vulnerable to the dark world of trafficking. Having no other training, someone offering to take care of them and get them a job making thousands a night sounds like a dream come true, until they realize they are trapped in just the opposite. They are drugged and malnourished to keep them weak, and the people who once promised them love that they desperately needed don’t even bat an eye at their suffering.

This was the story of one woman we worked with, I’ll call her Miranda, who was promised a nice cleaning job in the city. This seemed like heaven in comparison to the maid position she previously had, where she was frequently abused.

Her parents passed away at a young age, and when her brother’s new wife was also abusive, she ran away for a life she desperately hoped would be better. Being of the lowest caste, it was difficult to find work. The man who offered her work in the city was her escape, her chance at freedom and love. But when she got to the city, she soon discovered she had only been taken advantage of yet again.

She was sold up to 40 times a day, and lost hope until one day she heard an ad on the radio for Raksha Nepal. She sneaked to call the number in one last plea for help, doubting that anyone would really come through, and was rescued soon after.

She was shown unconditional love for the first time in her life, and today she works with all the other survivors at the shelter, pouring love into them as the women of Raksha once did for her. I will never forget the tears that fell down her cheeks and the pain that flooded her eyes as she fearlessly shared her story with us so that we might tell others. But, I will also never forget her contagious joy and the smile that spread across her face whenever she danced. She experienced the worst corners of an already horrible industry, but still managed to laugh and give hugs far more than the average person.

She, and every other survivor of sexual exploitation we worked with, inspires me in their fight for recovery and willingness to love.

But, unfortunately, this problem is not just in far away places like Nepal. It is an ever growing industry right here in the States that is ultimately fueled by pornography. The problem is not just that these vulnerable girls, boys, men and women have odds stacked against them, it is that people are so hooked on sexually exploitive things like pornography that the existing demand for trafficking has only grown.

Within the hurt of every girl’s eyes that I met, I could see a life forever changed by actions compelled by this horrible obsession or addiction. While there will never be a way to rescue every girl, boy, man, and woman from these dangers before she’s even exposed to them, there are ways to demolish the preexisting mindsets that create and fuel the demand. Whether that be through sharing about the harmfulness of pornography, donating, empowering the people around you, or any other manner of ways, you can always fight for a change. You can always fight for love.