By Fight the New DrugDecember 13, 2021No Comments

We’ll tell you. Ready for the answer?

You can’t, really. And here’s why.

Consider this story: one female survivor, whose captor slept on top of her at night so she wouldn’t escape, watched her through a hole when she went to the bathroom, and listened to her phone calls with a gun pointed at her head, was forced to appear in a video that made the Sinclair Intimacy Institute’s list of “sex-positive productions”!Catharine A. MacKinnon, Are Women Human? (Cambridge, MA: Harvard University Press, 2007)COPY

“Every time someone watches that film,” she said, “they are watching me being raped.”

But aside from that, we have definitive proof that there are videos of trafficked individuals all over mainstream sites right now.

Keep in mind that sex trafficking rarely looks like the movies—young women kidnapped at gunpoint, ferried across national borders, and forced into sexual servitude. That absolutely does happen, too, but the majority of trafficking cases do not look like that.

Now, 50 women identified as “Jane Doe” have filed a lawsuit against MindGeek, Pornhub’s parent company, for allegedly knowingly profiting from images and videos of their GirlsDoPorn sex trafficking nightmares and failing to properly moderate MindGeek-owned sites for the abusive videos.

It’s worth noting that Ruben Andre Garcia, 31, the male performer in the GirlsDoPorn videos, changed his plea in early December from not guilty to guilty of “conspiracy to commit sex trafficking” and “sex trafficking by force, fraud, and coercion.”

Here’s a real story from a sex trafficking survivor

We sat down with one of the women who was trafficked by GirlsDoPorn and she told us everything that happened on a trip she agreed to take for what she was told was a fitness modeling job. Here’s one part of Jane Doe’s story:

In the hotel room, the men who had been handling her took Jane’s cell phone and her soon-to-be sexual assailant, Andre, unplugged the hotel telephone. He said they didn’t want to be disturbed—he had a justification for everything.

They sat Jane down at the desk and placed a contract in front of her. When she asked to read it, they told her there wasn’t time. She requested a copy to be emailed to her and they agreed, but she never received it. The men intimidated her by standing over her shoulder, flipping through the pages, telling Jane where to initial without letting her read the text.

Whenever Jane protested the men coerced her into compliance, saying they canceled her hotel and her return flight. They refused to fly her home unless she complied with everything they said.

There it was. The reality of the situation. She was forced, tricked, and coerced into these circumstances—and now she was being sex trafficked.

Jane estimates they began filming at 9pm and didn’t finish until 3 or 4am.

“Basically, I got raped for however many hours that was,” Jane said. “It was a constant assault, and it wasn’t the least bit gentle. It was brutal.”

Two weeks later, a boy Jane went to high school with sent her a picture of his penis with a graphic sexual message. She was shocked and confused.

“I was really scared. I didn’t know if they were going to kill me. Watching the video now, I can see it in my eyes. The quivering of my lips and my voice, I know exactly how I was feeling in that moment. But to anyone else who sees it, they see what they want and they think I was complicit,” Jane said. “I’m sure most of those viewers were not aware that by watching the videos, they were participating in human trafficking, assault, and rape.”

Click here to read the entirety of Jane Doe’s story.

Consumers could watch trafficking or rape and not know it

“I was threatened that if I did not do the scene I was going to get sued for lots of money.”

“[I] told them to stop but they wouldn’t stop until I started to cry and ruined the scene.”

“He told me that I had to do it and if I can’t, he would charge me and I would lose any other bookings I had because I would make his agency look bad.”Hughes, D. (2010). “Sex Trafficking of Women for the Production of Pornography,” Citizens Against Trafficking.COPY

None of those quotes is from someone who was chained in a room. None of them are from victims who were beaten into submission or held at gunpoint in some dingy brothel. Each of those actors drove home at the end of the shoot and collected a paycheck. But does it sound like consent? Or does it sound like coercion?

As a legal matter, under the TVPA, these aren’t just people being bad at their jobs; these are potential sex trafficking crimes, punishable by up to twenty years in prison. In fact, according to the United Nations definition of human trafficking, it doesn’t even matter whether the victim said no: “the consent of the trafficked person becomes irrelevant whenever any of the ‘means’ of trafficking [coercion, fraud, threat of force, etc.] are used.”FAQs. (n.d.).COPY

So what’s the bottom line, here?

Modern sex trafficking shares a variety of symbiotic connections to pornography. Too often, they’re one and the same.

You can hate a thing. You can be outraged by it. But if you continue to sustain and engage with the industry that helps give it life, what is your outrage worth? Make it count, be a voice against modern-day slavery. Be a voice against sexual exploitation and stop the demand for sex trafficking through pornography.

If you or someone you know has experienced or is currently experiencing sex trafficking, please contact your local authorities or call the National Human Trafficking Hotline at 1 (888) 373-7888, or text the word “HELP” or “INFO” to 233733. 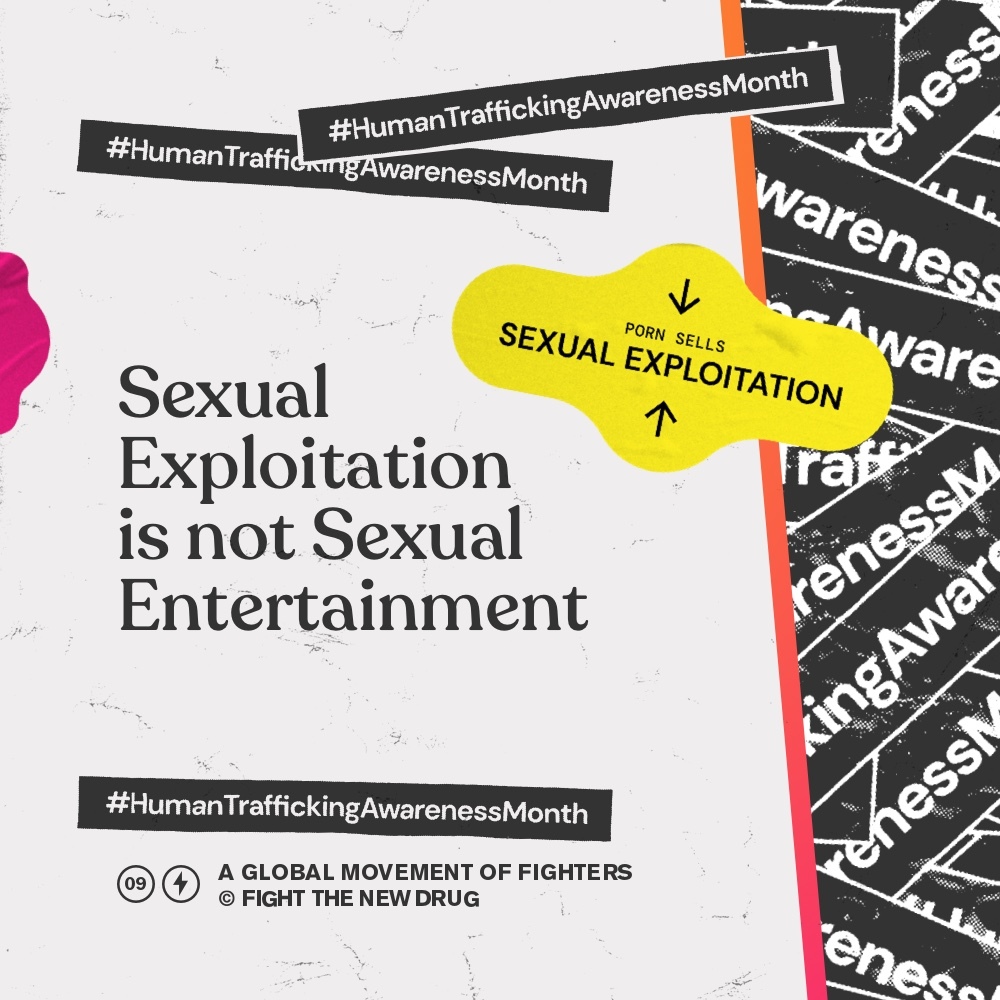