Here are a few examples of reliable sources to get you started the next time you need to fact-check a trafficking-related theory or story you see online.

Don’t believe everything you read on the internet. We know you probably don’t already, but it bears repeating.

In this social post, a claim was made that a Nashville woman was drugged by a stranger—her Uber driver—then taken to a warehouse to be trafficked. While the post suggests authorities later found and recovered the woman, local police say they have no record of the incident. This isn’t to say that this definitively didn’t happen, though it seems there is no reliable record of it happening. 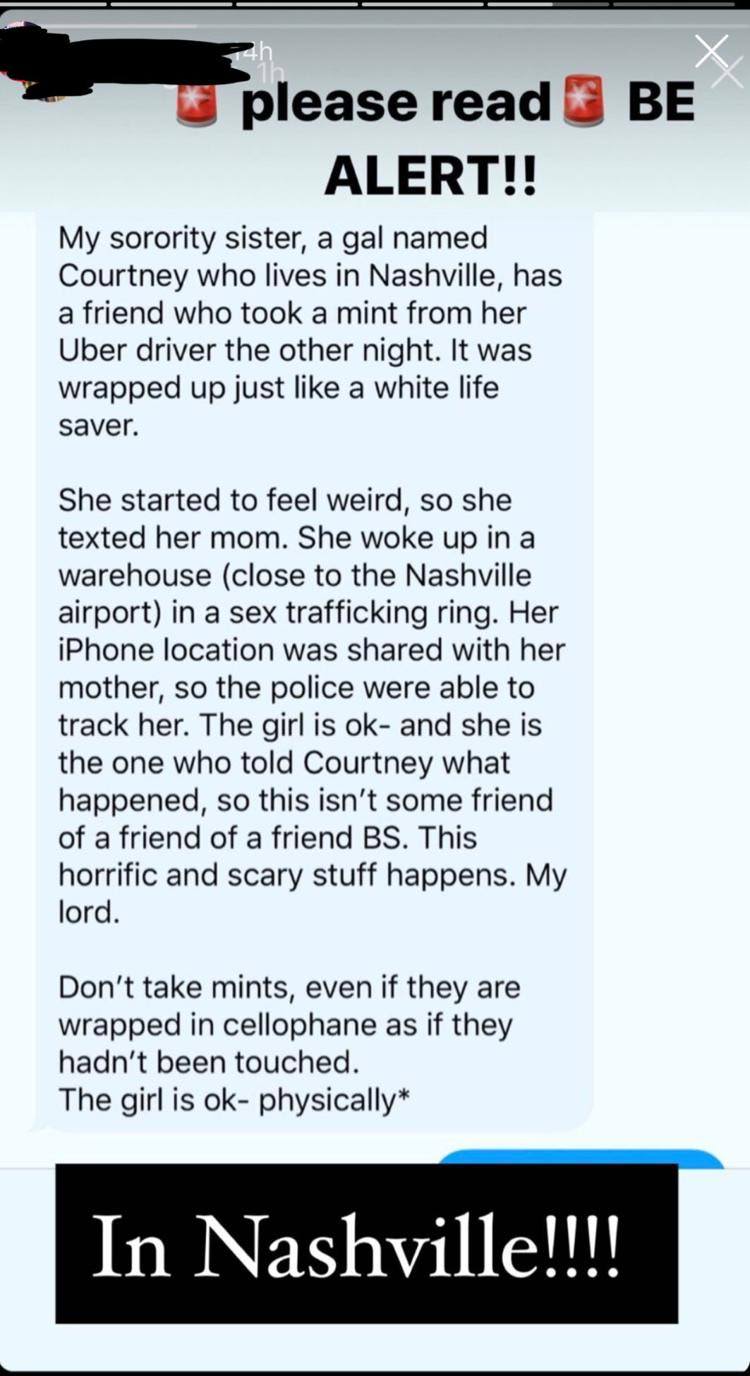 Now don’t get us wrong—trafficking like this can and does happen, and of course, a possible drugging and kidnapping situation is very serious.

While we can’t definitively say the incident did or didn’t occur, we do know that more often than not, trafficking looks more like a victim being taken advantage of by someone they know rather than kidnapped by a stranger like the movie “Taken.”

Margie Quin, CEO of End Slavery Tennessee, shared that while posts like these help raise awareness, they can also make matters more difficult for authorities, and she hopes readers will seek out more information. “They’re thinking the only way that could happen to me is if I was drugged and kidnapped…Typically you’ll see either familial trafficking which means you’re brought in very young. Anytime commercial sex involves force, fraud, or coercion, then that’s trafficking.”

Quin added, “I think [posts like this one] does a disservice to victims who are trafficked at young ages by family or are coerced, manipulated, or romanced unsuspectingly by a trafficker.”

The first step in fact-checking trafficking-related stories and theories is to understand a clear definition of what sex trafficking is.

The Trafficking Victims Protection Act, or TVPA, defines sex trafficking as a situation in which “a commercial sex act is induced by force, fraud, or coercion, or in which the person induced to perform such act has not attained 18 years of age.”

So while it’s devastatingly true that some victims are drugged, thrown into the back of a car, and sold for sex—much like a scenario from the movie “Taken”—this is only a very narrow perception of what sex trafficking really looks like across the globe.

And while all of these situations are traumatic and unacceptable, they do look different than the action sequences of “Taken.” Promoting only Hollywood versions of what a sex trafficking victim goes through can do a great disservice to real victims whose reality may look much different but whose stories still matter. It is possible to have been sex trafficked and also receive a paycheck and sleep in your own bed.

No version of human trafficking deserves to be diminished because it isn’t “that bad.” All versions of trafficking need immediate attention and awareness, whether kidnapping has occurred or not.

Get the facts from reputable anti-trafficking organizations

The encouraging news is, just like we do, there are many survivor-led organizations and reputable organizations out there that you can use as the baseline for information about trafficking.

Here are a few examples of sources to get you started the next time you need to fact-check a trafficking-related theory or story you see online. Note that this list is incomplete and linking these organizations does not constitute an endorsement by Fight the New Drug. While some of these organizations might have legislative or religious involvement, Fight the New Drug is non-religious and non-legislative.

If you hear about a specific story from a specific area, it might be worth checking local media reports and local police station’s social media to see if there are corroborating reports of the incident in question happening or clarifying information, like the Nashville story above.

Ultimately, where you get information from matters. And in the fight against human trafficking, real progress can be made when each of us gets the facts and checks reliable organizations before sharing information.

So the next time you come across a trafficking-related story or post, try cross-checking it with one of the organizations like what we discussed above. See if any of these or other anti-trafficking organizations have posted about something on their social media. And once you’ve learned the facts, spread the word.

Your voice matters in the fight to end human trafficking. A world free from sexual exploitation is a goal we can all work toward—together.

Should you want to report or seek services related to a case of human trafficking, you can contact the National Human Trafficking Hotline at 1-888-373-7888 or email [email protected].