The goal of Realbotix is to create an idealized version of a man that is so lifelike, the consumer forgets they’re interacting with a machine.

By Fight the New DrugAugust 10, 2022No Comments

Trigger warning: The following post contains descriptions of sexual scenarios that may be triggering. Reader discretion is advised.

He’s responded to the ongoing accusations of objectifying women by creating a male version that is just as objectifying as its female counterpart.

But what is a sex doll, really?

Realbotix sex dolls are designed to be indistinguishable physically, cognitively, and emotionally from an actual human, except “hotter” and prepared to fulfill any desire. The most popular model of the Harmony doll is five-foot-one, 70 pounds, and has size 32F breasts.

One man—hired by McMullen to “test drive” female sex dolls like cars— said, “You can pick her nipples, eyelashes, eyebrows, colors, lipstick, makeup, fingernail polish, everything. And you can create the doll that is most arousing for you.”

Consumers even sculpt the personality of their doll—choosing from characteristics like sexy, funny, shy, jealous, angry, intellectual, talkative, insecure, moody—even specifying the characteristic they want to be dominant.

After designing the perfect doll, he plugs it in like an appliance and gets to work:

“Having sex with Harmony, I broke her. Knocked her senseless, mechanically. But that’s what Matt wanted me to do. Knock her around. Do what you got to do. We want to find out what the weaknesses are.”

In 2018, Realbotix announced the creation of the first-ever male sex robot.

There are conflicting reports about whether a male sex robot was ever made available—in June 2021, there were reports (link trigger warning) that they were still working on the bionic penis design for Henry.

(But what is clear is that Realbotix has totally redesigned their site to be less focused on the sex element of their products and make it seem as though anyone from any industry can make use of a lifelike humanoid robot, perhaps for customer service?)

The goal of their humanoids, designed with sex in mind or not, is to create an idealized version of what women want that is so lifelike, the consumer eventually forgets they’re interacting with a machine. 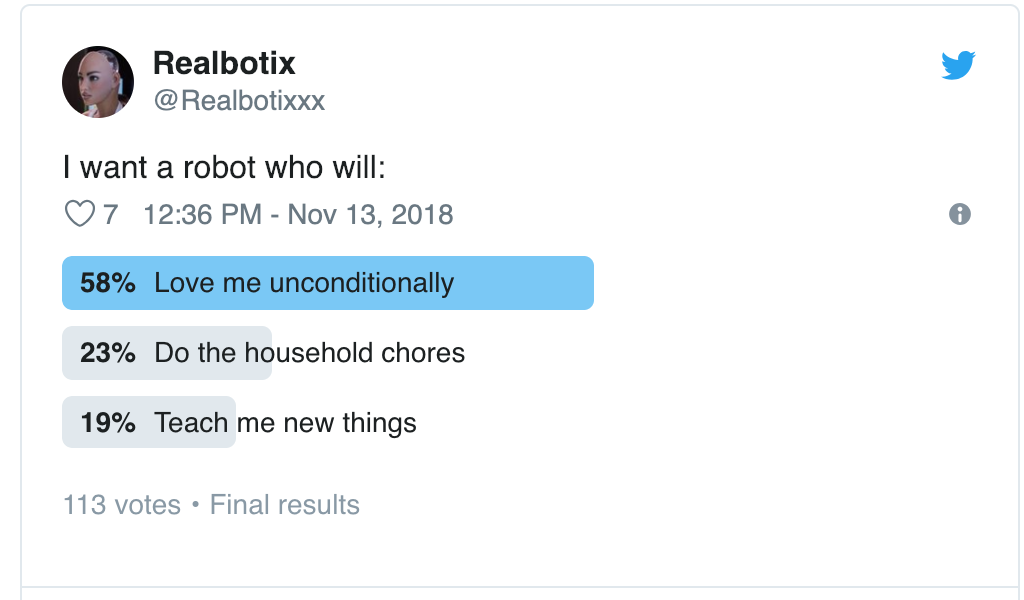 According to poll data gathered from Realbotix, women are looking not just for a sex partner, but a companion who will listen to them and form a meaningful connection.

The goal is for this inanimate silicone bot to win over a woman’s or man’s natural longing for unconditional love.

Their male sex robot does just that, objectifying men in the process.

He will come with six-pack abs, airbrushed features, and a customizable “bionic” penis that has more ribbed-for-your-pleasure vascularity than occurs naturally. The most significant selling feature is that it can “go as long as you want,” plugging into electricity instead of being battery-operated.

Apparently, Henry is always ready to perform and won’t ever quit.

In addition to tailoring his facial hair, pubic hair, and more, buyers can upgrade by ordering a customizable robotic head from an a la carte menu. These lifelike heads are about $11,000-$15,000 and give the robot it’s “personality”—including full facial animation. The heads are controlled by an app on the user’s phone.

McMullen says that his focus with the male robot is to create the feeling that there is someone there for you. When plugged in, Henry will apparently say phrases like, “You can count on me for the good and bad moments,” as reinforced by the Realbotix tagline, “Be the first to never be lonely again.”

McMullen has even coined his own theory: “If people are connecting with other people through technology, and if those virtual connections create loneliness and isolation, why not use technology to create an alternative sort of relationship—a relationship with technology?”

He admits that people are missing out on human interaction, and attempts to fill the gap with the fake companionship of a computer.

The impact of virtual reality sex on individuals and society

So what if lonely people want to invest financially, emotionally, and physically in a sex robot? Why would someone want to be with a real person if there’s a synthetic version that never tires, never quits, never says no, never gets pregnant or gives you STD’s—but exists solely to pleasure the consumer?

Many people don’t see anything unhealthy with that.

For example, David Levy, an expert in artificial intelligence, predicted that by the year 2050 humans will have a variety of intimate relationships with robots—including friendship, love, and marriage.

But take a moment to consider the societal and relational impact if these predictions—based on current trends—become a reality.

Silicone can never and should never replace skin

The sex industry as a whole exists to commodify sex and make a profit off of the vulnerability, loneliness, and isolation of its consumers. The basis of creating male and female sex robots shows that humans don’t just want sex, but connection. But the problem is, they can’t genuinely get that with something that isn’t real.

The disintegration of real relationships and the idea that people are comparable to objects for immediate consumption and disregard is harmful to individuals and society. While virtual sex promises to make loneliness disappear, research shows it objectifies the real humans it attempts to imitate, and leaves the consumer more lonely than before.Butler, M. H., Pereyra, S. A., Draper, T. W., Leonhardt, N. D., & Skinner, K. B. (2018) Pornography Use and Loneliness: A Bidirectional Recursive Model and Pilot Investigation, Journal of Sex & Marital Therapy, 44:2, 127-137, DOI: 10.1080/0092623X.2017.1321601Copy

Choosing reality doesn’t mean settling for less, but giving yourself the opportunity for so much more—real human connection in all its raw and real imperfection. That’s something a silicone copy can never provide, no matter how much money someone spends on it.