Cover image from a feature by This Morning. 4 minute read. Imagine your parent coming home with an addition to the family. But this family member isn’t a... 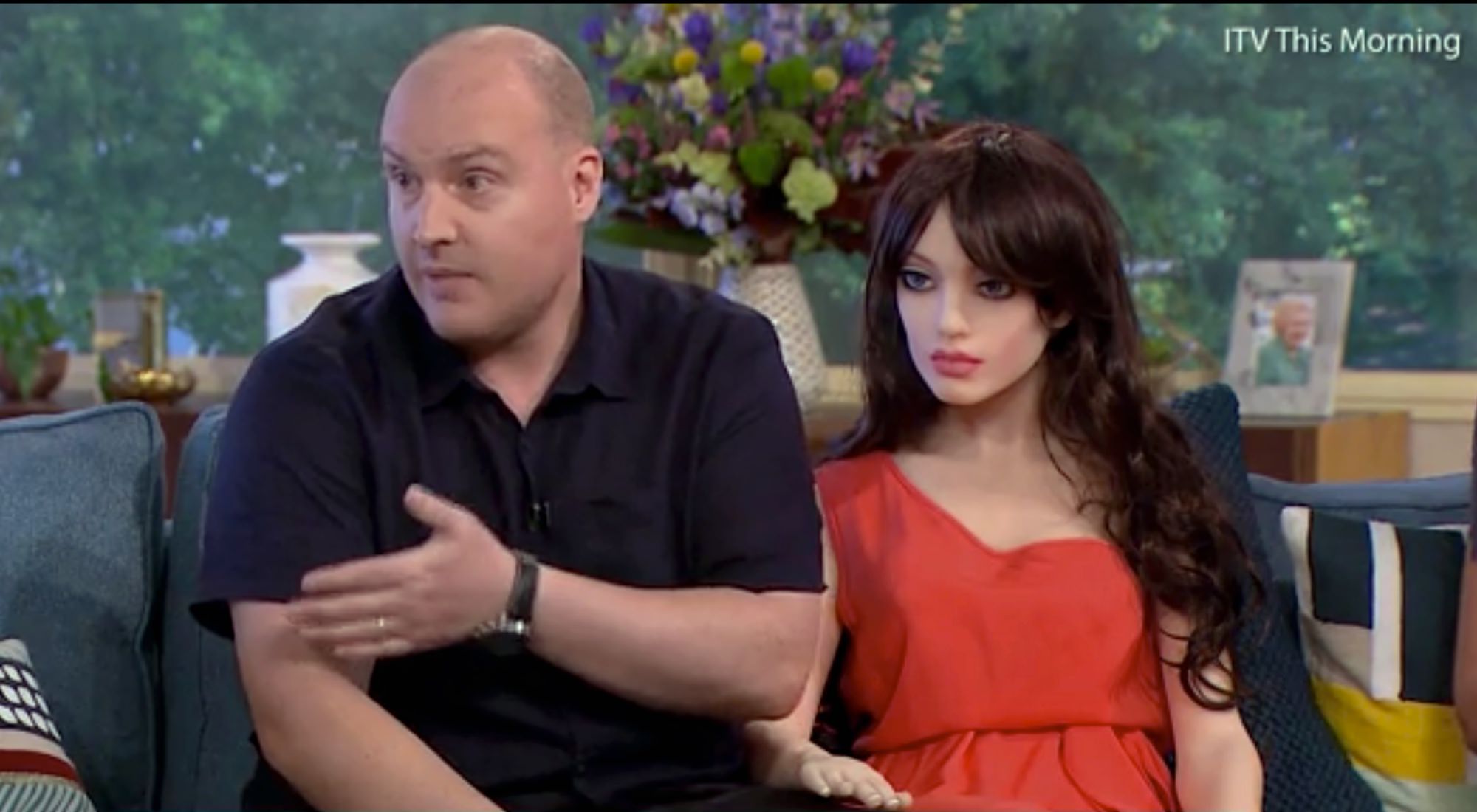 Cover image from a feature by This Morning. 4 minute read.

Imagine your parent coming home with an addition to the family. But this family member isn’t a new baby or cute pet…it’s a life-size, silicone sex doll.

This might sound like a creepy plot to a futuristic movie, but this is really happening in the UK.

Meet Arran Lee Wright, 36, from North Wales, who spent about $4,700 developing a specialized, hyper-realistic sex robot whom he calls “Samantha.” He was recently interviewed along with his wife by co-hosts Phillip Schofield and Holly Willoughby on the British morning show “This Morning” about how he has incorporated this robotic-sounding sex machine into their family life.

Here’s how the exchange went down when he brought his silicone girlfriend to the show:

“It would be quite frightening if a child found that in your wardrobe,” co-host Holly said to Arran. “Well, I have two children myself,” he said. “And they actually—well, this one’s got a family mode.” He went on to explain how “Samantha’s” specialized mode prevents her from making any inappropriate comments at the wrong moment, and that she even tells jokes.

Related: As Sex Robots Become A Reality, Here’s Why They’re Dangerous For Society

Holly, concerned, asked Arran, “But at some point, they are going to know eventually that daddy has sex with Samantha and she isn’t mummy. Is that not a bit strange?”

Arran, the co-founder of a website that sells lifelike sex robots for thousands of dollars, denied that it was “strange,” saying, “A sex robot is not to replace people and we’re not trying to replace women. It’s used as a supplement to help people.”

He says that his children, who are 5 and 3, are used to seeing the doll around the house and ask, “Where’s Samantha?” when she’s not around. She can normally be found sitting on the couch with his children or even riding in the car, and is like “a member of the family” according to Arran and his wife.

Arran’s wife, Hannah Nguyen, 38, even confirmed she was more than happy for the doll to join them in bed.

Not Everyone’s On Board

While it’s difficult to deny that synthetic sex is becoming more normalized in our sex-obsessed culture, it might be a while before other families start bringing home their very own “Samantha.” During the show, viewers took to Twitter to express their shock and downright disgust at the idea of a sex doll being a shared family companion: 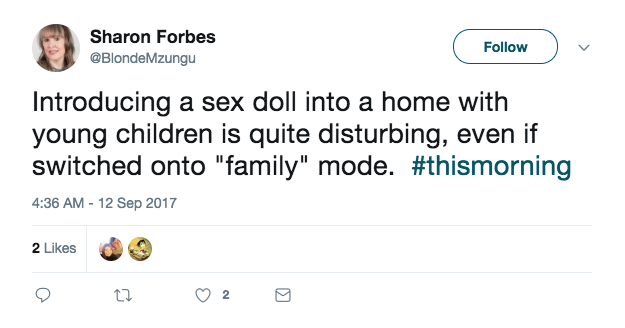 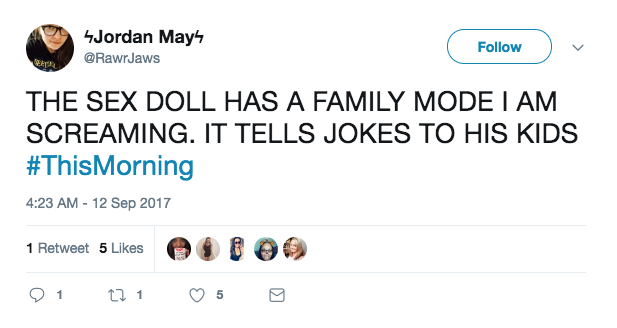 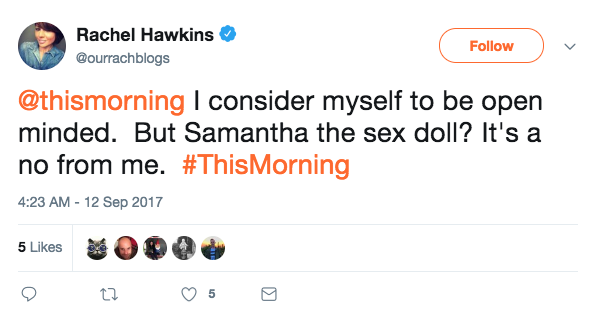 The sex doll dad also drew the criticism from mommy bloggers, news outlets, and the psychologist who was interviewed on “This Morning” along with him.

Psychologist Emma Kenny said on the show that she believes robots like Samantha could be the death of healthy human relationships. She slammed the idea of sex dolls for objectifying and commercializing women’s bodies.

She said that “it wasn’t acceptable or healthy” to use the technology in the way that it can replace relationships with simulation.

The Problem With Synthetic Sex

Many people are quick to see the short-term benefit of having a sex partner who can’t disease them…or even fight back.

Arran says he thinks that dolls can help people, but some experts are warning of the potential catastrophic damage that AI sex dolls could cause–that widely available, highly-advanced sex robots could very well encourage even more sexual violence than society could imagine possible.

One such expert, Professor Noel Sharkey, a computer scientist, warns against the troublesome implications of producing such robots in a study he co-authored called Our Sexual Future With Robots. Sharkey also recently launched the Foundation for Responsible Robotics to keep watch over the potential dangers of sex robots.

According to Sharkey, the argument that sex robots can help people with unconventional or illegal sexual urges is a weak one, and that it will most likely encourage even more sexual violence.

He says this in reference to robots already on the market that have a setting that could simulate rape.

“The idea is robots would resist your sexual advances so that you could rape them,” he told Business Insider. “Some people say it’s better they rape robots than rape real people. There are other people saying this would just encourage rapists more.”

Why We Don’t Take Fake

We can’t accept technology taking the place of real, healthy human relationships. Whether it’s a computer screen or a sex doll, we need to be educated and take a stand for healthy sexuality and human connection that is rooted in authenticity, mutual love, and mutual trust. Science, facts and personal accounts all agree that synthetic sex isn’t best. At the end of the day, we should each strive to remember this: 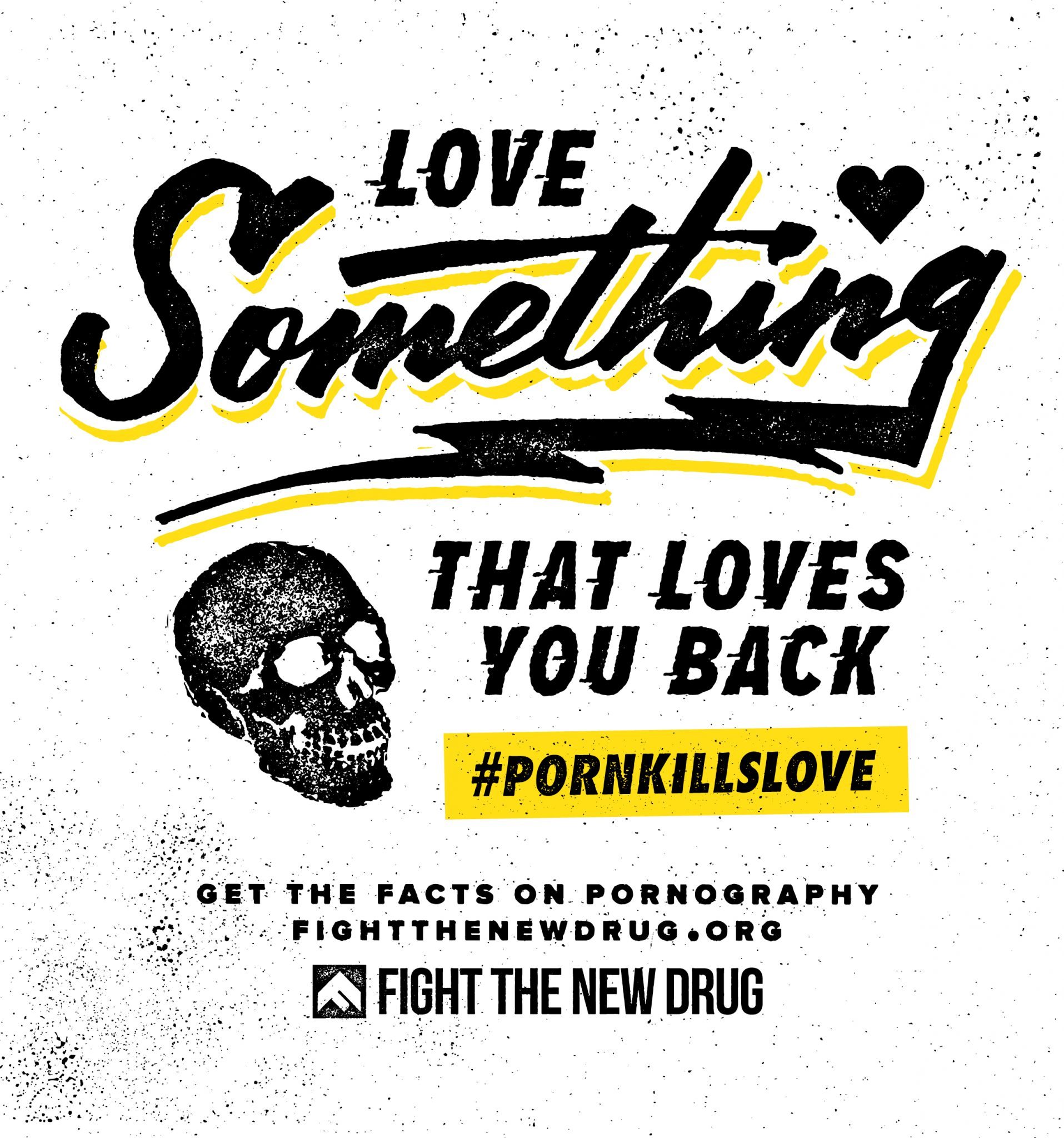 If you don’t think that sex dolls should be a normalized part of our society, SHARE this post. Take a stand for healthy real relationships.