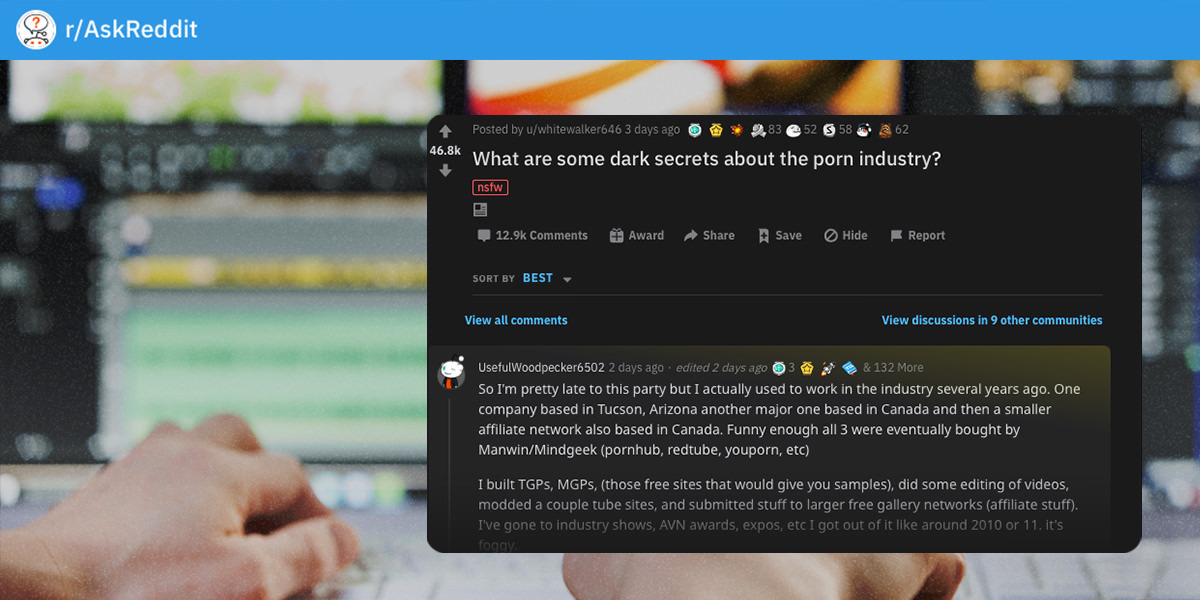 It’s very graphic, and we’ve edited for grammar and censored a few words, but we largely left his story the way it is. It’s important the word gets out that the glamorized industry consumers see on screen is nothing like what really happens when the cameras stop recording—or even when they are rolling. Here’s what he said.

I built TGPs, MGPs (those free sites that would give you samples), did some editing of videos, modded a couple of tube sites, and submitted stuff to larger free gallery networks (affiliate stuff). I’ve gone to industry shows, AVN awards, expos, etc. I got out of it around 2010 or 11. It’s foggy.

New content would come in (filmed/shot) daily and it needed to be edited/published ASAP. It didn’t matter what the talent looked like. Hot, drugged out of their gords, crying, happy, questionable age, raped, didn’t matter. The company paid for it and it all had to be used.

If I objected to questionable material, I was told to ignore it and do my job.

When the stuff is shot, it’s shipped off to the main office to be edited. Like I said, they shoot EVERYTHING. Nothing is tossed.

4. It’s a very closed-door industry. Everyone knows everyone.

Affiliates like to only be called by their online screennames and get offended if you call them by their actual name.

There were industry message boards back in the day, one that stands out is “gof—yourself dot com” or something where everyone knew everyone and had agendas against each other. Ever have to meet someone in person and call them “Batman” or “hairyt—” to their faces? I have, it’s unpleasant.

Day one, I was told I needed to come up with a name and I thought they were joking. No. It’s quite serious. They’re all looking to stab each other in the back for higher payouts, scam the system, or accuse others of whatever. If you got footage of one of them doing coke or a producer the company didn’t really like doing drugs or f—ing or whatever, then you were told to save that footage, again, “just in case.”

It’s an industry full of “middle-schoolers” who got rich from DVDs.

Guys like to submit their own videos to gay tube sites who might not even be gay. I had to moderate these videos (I’m not gay, btw) meaning daily, we’d get user submissions and I’d either allow them to be posted or deny them. I also moderated the “straight” tube sites. The majority of the time there’d be messages attached to said videos asking if I watched them, what I thought about them, etc.

Not a whole lot of women making submissions, but 8 times out of 10, it’s dudes. These are homemade videos by the way.

How do I know it’s real? Remember that 2257 stuff? ….yeah. The majority of it doesn’t make its way online because it’ll be denied, but it does happen. A lot.

I think that’s most of the main stuff off the top of my head. Like I said I haven’t done it in over a decade and I’ve switched careers several times. I’m desensitized to it now and won’t watch it at all.

Click here to read the original comment in its entirety. Link trigger warning, there are very explicit issues discussed on this thread.

As a couple of anti-exploitation advocates wrote in response to the legal decision, “While the production and distribution of child pornography remain illegal, the law is toothless without record keeping. The requirement provides the only way to verify and track performers’ ages and serves as a major incentive for businesses across the complex supply chain to monitor content.”