Finally Freed: Why We’re Not Sorry To See The “Fifty Shades” Trilogy End

There's nothing entertaining about poorly made films that normalize sexual violence (mostly toward women) while promoting themes of inequality, abuse, and coercion. 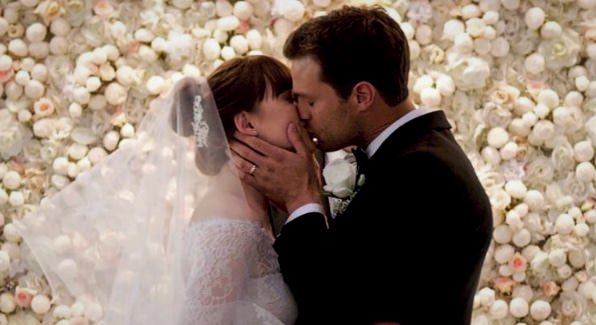 It’s the moment we’ve all been waiting for: the end of the “Fifty Shades” series.

Despite pretty terrible critic reviews and backlash on its harmful content, the “Fifty Shades of Grey” franchise is a financial success, if not a critical one. Despite earning a measly 25% rating on Rotten Tomatoes and being named Worst Picture at the 36th Golden Raspberry Awards, the last movie, “Fifty Shades Darker,” still earned a whopping $571 million at the box office.

Half a billion dollars later, it now holds box office records like largest Valentine’s Day earnings and fourth-highest R-rated earnings ever. And with the opening of “Fifty Shades Freed,” the film is expected to push the trilogy over the huge $1 billion mark.

Just like the release of the first and second films—and in ironic and gimmicky fashion—the new movie is opening the weekend before Valentine’s Day. The obvious irony is that on a day celebrated for expressing romantic love and affection, this story is anything but.

Is it truly an ideal “romance” story?

This dark and twisty trilogy ends with a “picture perfect” wedding followed by some kidnapping drama and then a surprise pregnancy that makes Christian furious, but ends up being exciting for the happy couple. It sounds nice, but the underlying message is quite the opposite.

But first, let’s look at what’s being said on Twitter about the almost-released film. Most people should be outraged that this abuse-packaged-as-romance film is being released at a critical time in the #metoo movement, right? Unfortunately, no. Most of the reaction to the film looks something like this: And that seems to sum up most of the hype for the final installment of the “Fifty Shades” series. But some of us who know the story have a very different reaction to the racy film’s release.

We’re not sorry to see the “Fifty Shades” franchise hopefully fade into distant pop-culture memory due to the twisted and warped ideas about sex that these books/movies normalize and romanticize in society.

And not only that, but also capitalizing on the toxic idea that if a victim stays with their abuser long enough, they can change them and ultimately end up in a fairytale relationship.

In order to understand the harmful messages of the books, and now big-budget films, one must see the overall storyline for what it is. For those who aren’t familiar, the story centers around a controlling and sadistic millionaire CEO with a tormented past who seduces a sweet, inexperienced college girl into his selfish world of painful bondage sex.

And ultimately, these books normalize and romanticize Christian Grey’s stalking, possessive, and manipulative behavior as being somehow affectionate and expressive of love. The movies aren’t much better, unfortunately.

Even worse about “Fifty Shades,” is that this pretty much is the story. There’s no quality plot, there’s no big surprise ending where he gets real help from a mental health professional for his childhood trauma and Ana leaves him because of his sexual and mental abuse and stalking. It is just an entire series—and now an entire movie franchise—about a handsome, rich businessman who seeks to sexually abuse and act out sexual punishment on unsuspecting women who look like his deceased, drug-addicted mom.

Yeah, that doesn’t sound like “couple goals” to us, either.

In order to truly highlight the extremely negative and harmful ideas contained in the “Fifty Shades” franchise, we made a list, with an accompanying infographic, of what this story is actually teaching. And as you can see, it’s far from a fairytale.