How Many Teens Send and Receive Nudes? More Than Ever, This Study Shows

Sending and receiving nudes has become the norm among teens. For example, this newer study shows that twice as many kids aged 9-12 reported sending nudes of themselves in 2020 compared to 2019.

By Fight the New DrugFebruary 28, 2022No Comments 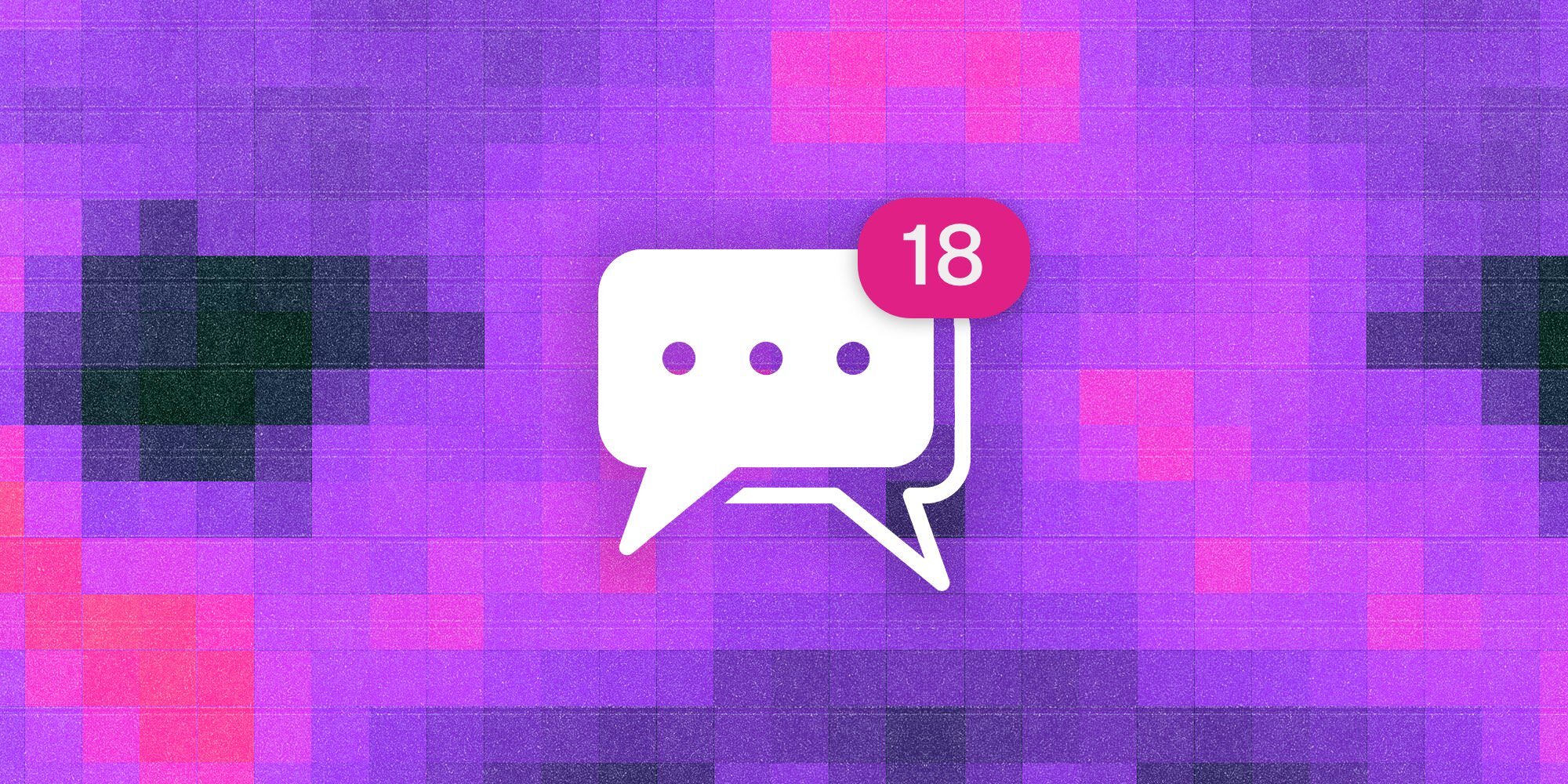 New research conducted by Thorn, a nonprofit that works to prevent child exploitation, shows that teens and tweens are sending and sharing more nudes than ever.

This trend is especially worrisome among parents and sexual abuse experts, as even younger kids are sharing more nude images of themselves—often with adults—according to the study.

Even if shared with just with one person, images can quickly and easily be widely distributed and become part of the network of child sexual abuse material found all too prevalently online.

Examining year-over-year changes related to how kids share, receive, and re-share self-generated child sexual abuse material (SG-CSAM) and their perceptions of this topic can have a significant impact in how we understand and address these issues.

Thorn CEO Julie Cordua shared, ”Puberty and technology are on a collision course, and kids now face situations online that their parents never experienced, at a younger age than most people would think.”

COVID-19 remains a global pandemic, and the true long-term impacts are yet to be fully understood. But Cordua also emphasized that the pandemic has made this issue even more challenging, particularly with kids spending more time online—and often with less supervision. “It has never been more urgent that we talk with our kids about online safety. That can start with having an honest, judgment-free conversation as soon as children have access to a device.”

This issue is a complex and ever-changing one, particularly with a constantly evolving online environment and consumer habits, differences in attitudes toward sexuality, immense stigma and sensitivity surrounding this topic, and, of course, an ongoing global pandemic.

We’re constantly learning more about how nudes are normal for teens, but this study is a significant reference point.

A diverse group of 2,002 minors aged 9-17 from across the United States participated in a 20-minute online survey from October 26 to November 12, 2020, and the resulting study was published in November 2021. It focuses particularly on youth attitudes and experiences with “sharing nudes,” or self-generated child sexual abuse material (SG-CSAM), which is defined as explicit imagery of a child that appears to have been taken by the child in the image. SG-CSAM can result from both agreed-upon or coercive experiences.

Thorn’s first version of the study in 2019 resulted in a few clear findings, which remained consistent with the data from 2020:

1: Sexting is becoming viewed as a “normal” activity among peers.

2: Coercion plays a critical role and exponentially increases the risk to the victim.

3: Attitudes of blame and shame can compound the harms of online threats and unintentionally isolate young people.

The 2020 study also points to unique vulnerabilities among some demographics, especially an increase in risk among 9-12 year olds. Below are some of the 2020 study’s highlights by category.

A reported 22% of boys aged 9-12 believe their friends at least sometimes share nudes of other kids.

The number of kids who re-shared someone else’s SG-CSAM remained basically consistent in 2020, but there was another significant spike in minors age 9-12 who perceive it as normal to re-share other kid’s SG-CSM.

An increase in perceptions of normalcy for both sharing one’s own nudes and nonconsensually re-sharing someone else’s was most notable among 9-12 year olds and among boys in particular. 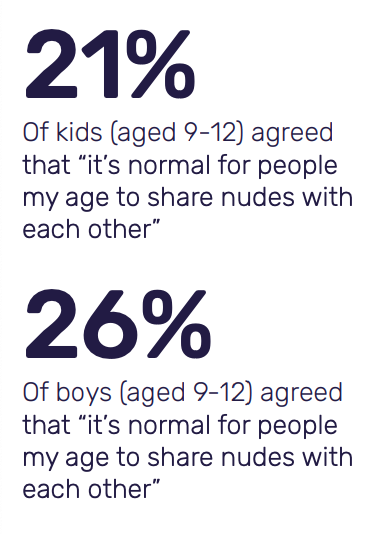 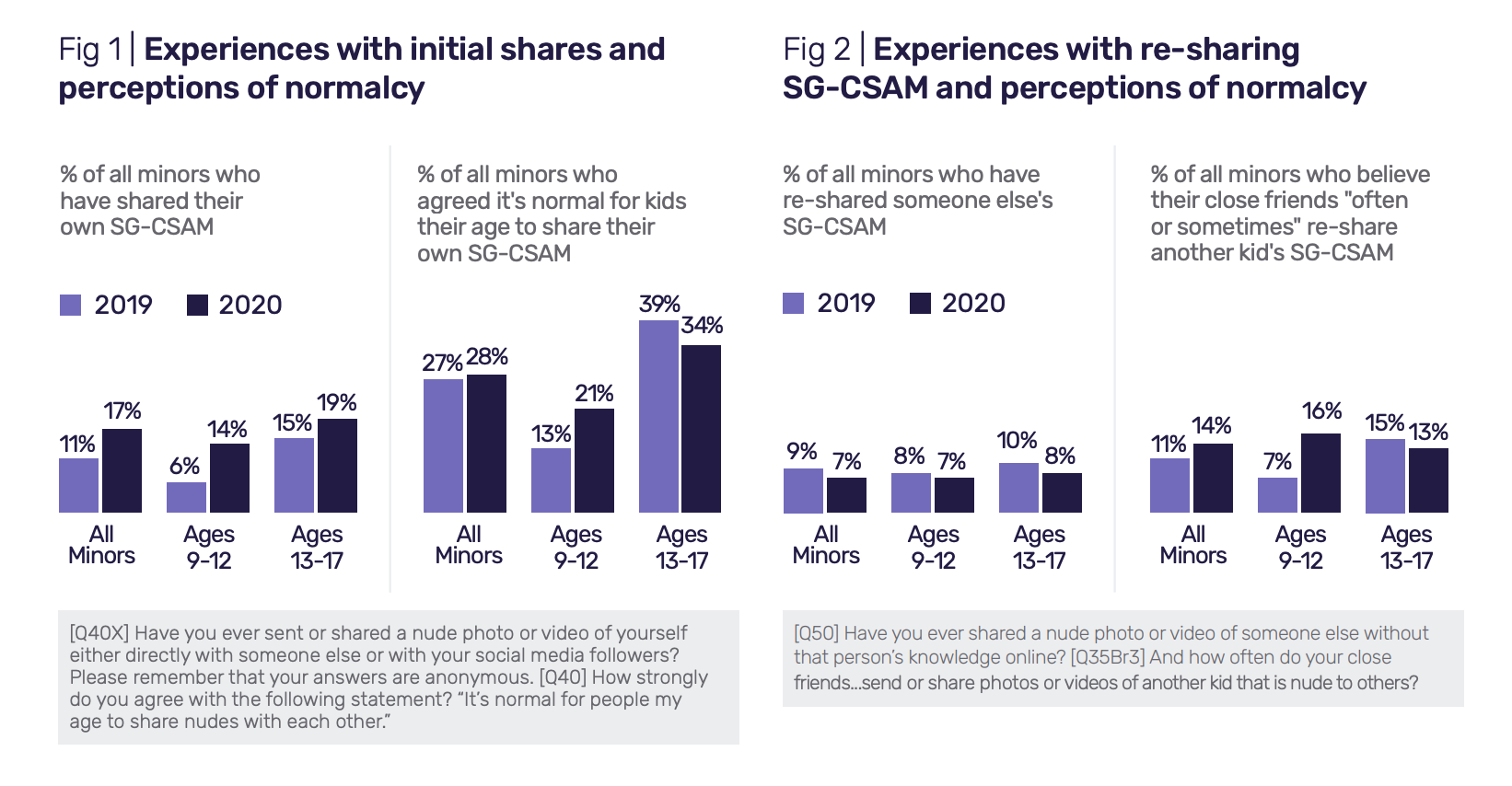 The digital landscape and platform popularity

Data continues to show that kids who have shared, re-shared, or been sent SG-CSAM use many of the same platforms as their peers who haven’t. However, Tumblr appears in the top 10 list for sharers and re-sharers but not for the broader sample.

It’s also significant that kids who have shared, re-shared, or been sent SG-CSAM reported notably higher usage rates of these platforms compared to the broader sample. 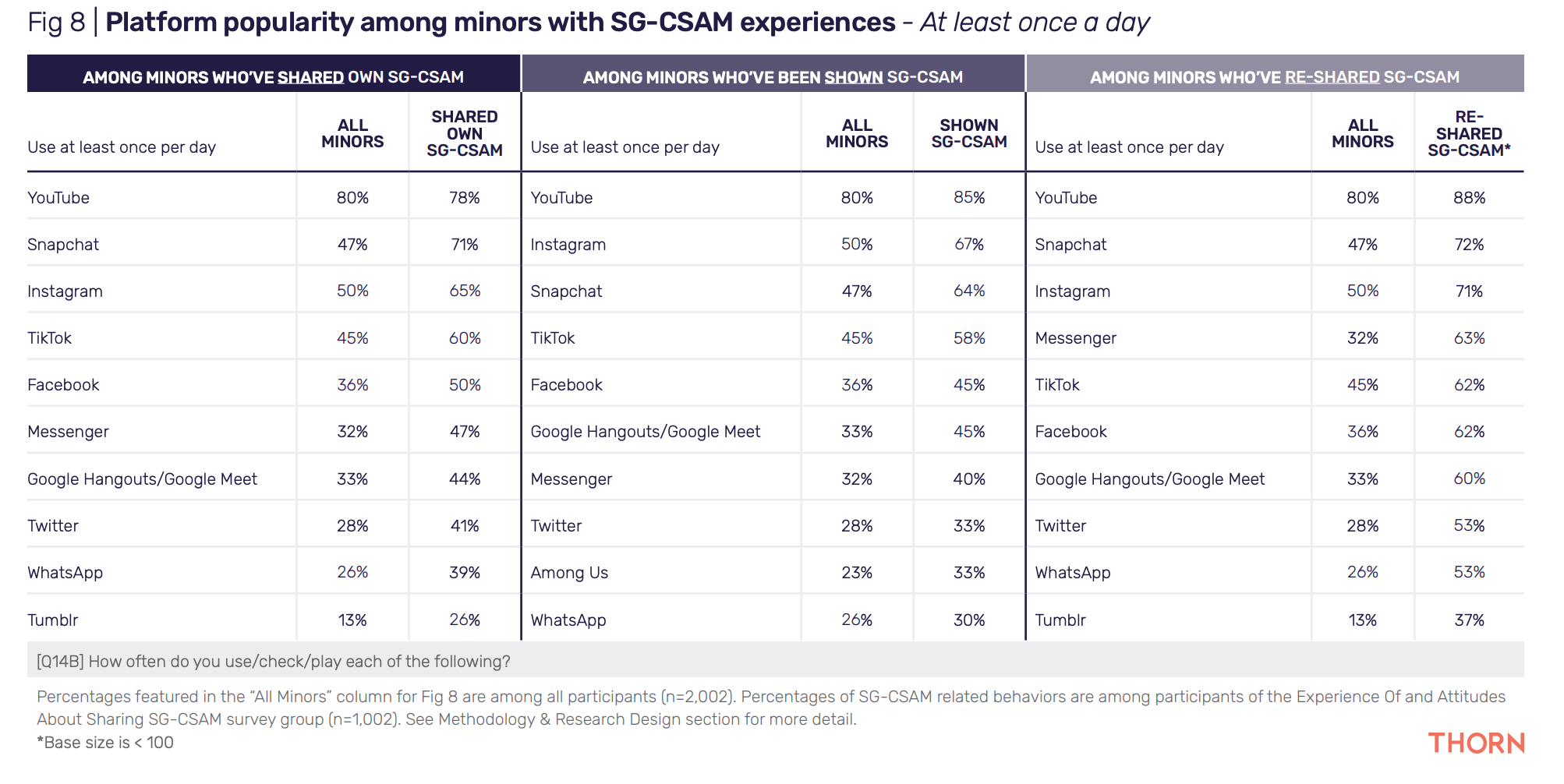 The use of secondary accounts that are meant to keep content private from parents or friends, like “finstas”—”fake” Instagram accounts with a pseudonym—increased most significantly among 9 to 12-year-olds. This age group also reported the most significant drop in following online safety rules like check-ins, blocked apps or websites, limits on games, social media monitoring, permission to open a new social media account, permission to download new apps, common areas only, and limits on screen time.

In 2020, youth across almost all demographics produced more SG-CSAM. The increased rate of initial shares was most pronounced among 9 to 10-year-olds, boys aged 9-12, and LGBTQ+ youth. 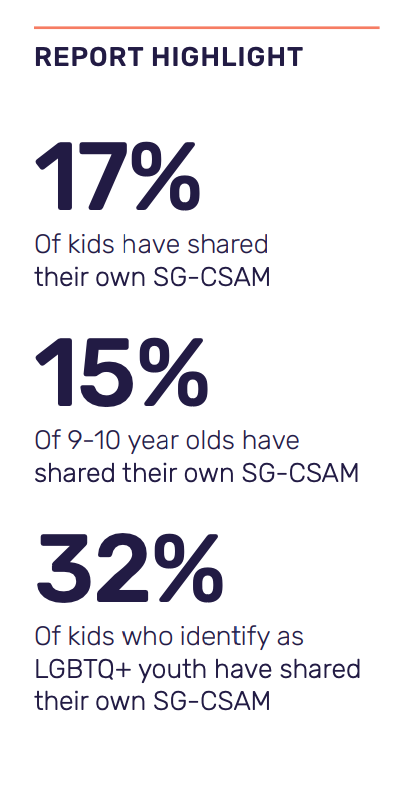 Among kids who have shared nudes: 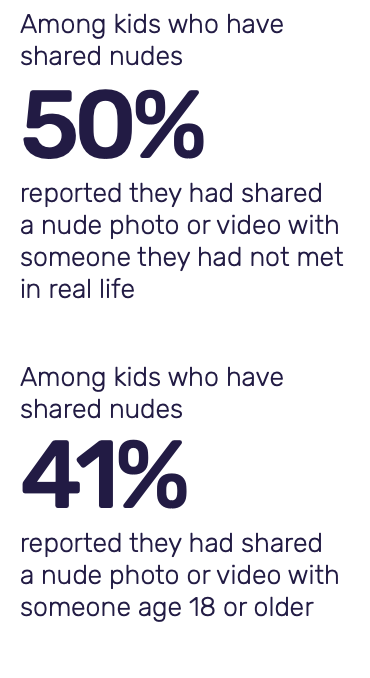 Considerations for sharing their own SG-CSAM

The percentage of minors who have considered but ultimately didn’t share their personal nudes remained stable, but their reasons for refraining are changing. The potential to have one’s nudes be re-shared or “leaked” remained the primary reason for deciding against it

However, in 2020 youth decreasingly identified pride and self-respect as a deterrent when considering sharing nudes. 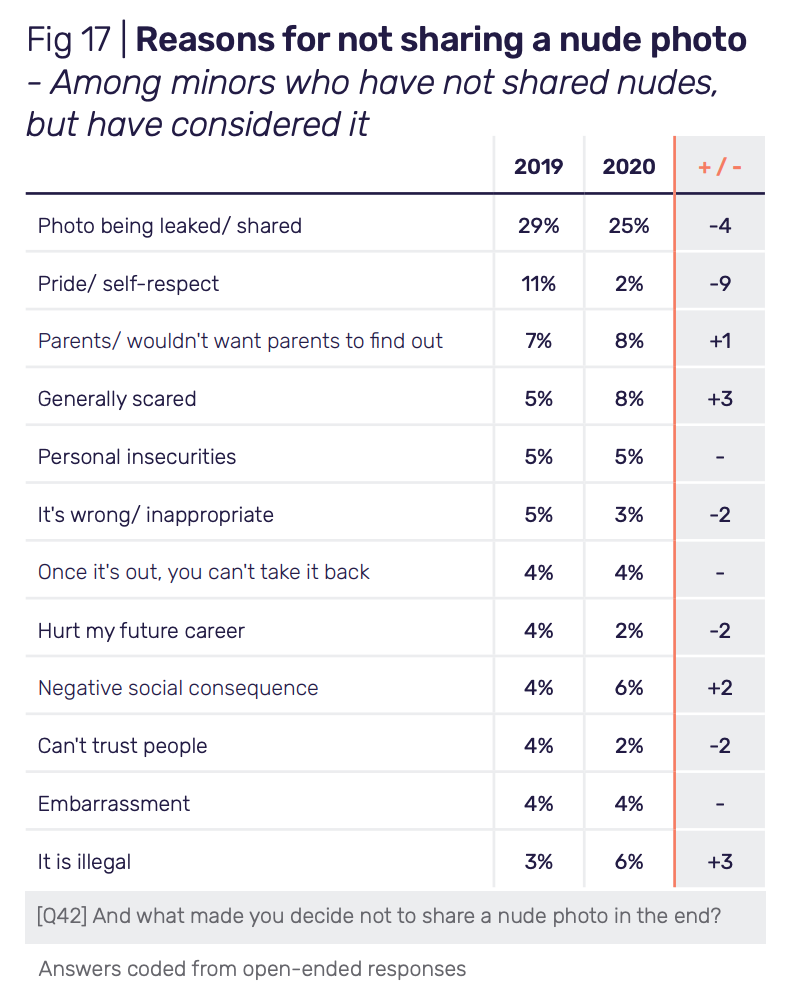 However, youth reported being more likely to face consequences, like getting in trouble with parents or at school, for sharing nudes without the person’s consent compared to 2019. 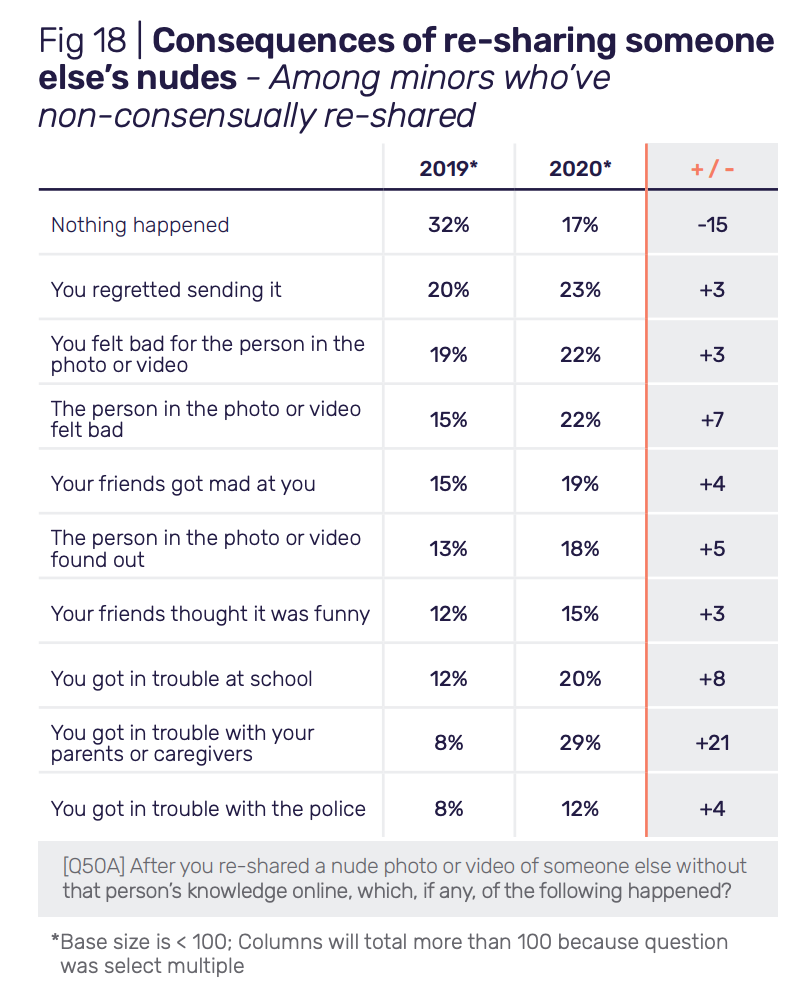 Youth perceptions of legality and blame

All youth showed an increase in the perception of re-sharing SG-CSAM as being legal, but the increase was most pronounced among 9-12-year-olds—girls in particular (+16%)—youth who had re-shared SG-CSAM of others (+16%), and those who had shared their own SG-CSAM (+8%).

In the study, 62% of kids exclusively or predominantly blame the re-sharer.

It’s clear that kids are increasingly engaging with SG-CSAM, both in exploratory and high-risk ways—and at a younger age. Where technology and child sexual abuse intersect online is an ever-evolving threat to youth, and more of them are engaging with it while perceiving it’s legal, normal, and even expected.

It’s concerning to say the least, but studies like these with direct feedback from kids themselves help us learn how to safeguard and support them as they navigate their online experiences.

And getting the whole picture on this issue has to involve seeing porn’s role in it all.

Related: Teen Girls And Boys Both Take And Send Nude Pics, But For Different Reasons 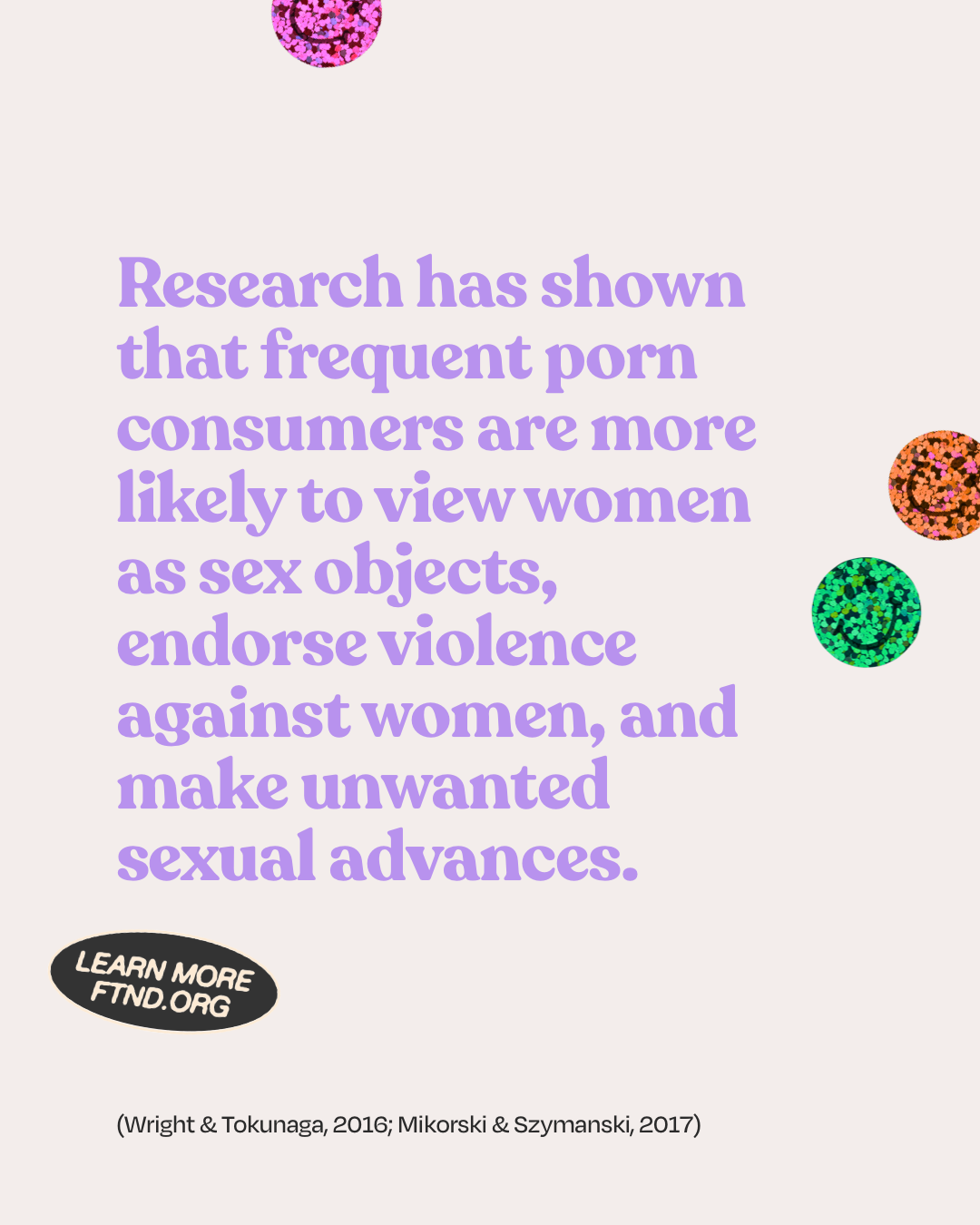