This guest post was written by Dr. Angie Henderson, Co-Founder of The Avery Center.

The “Boy to Buyer” Pathway, and How To Disrupt It

By Angie Henderson, Ph.D., University of Northern Colorado, Co-founder of The Avery Center for Research & Services

I have had the privilege of gathering and analyzing data on the reasons men buy sex for the past six years.

This work has included:

The stories I’ve heard have helped to paint a picture about what forces, both societal-level and individual-level (and everything in between), put boys on the path to becoming buyers.

It should be noted here that, in my six years of research on this topic, I have never encountered or heard from victims, survivors, or escorts that they’ve encountered a female sex buyer. This is supported by decades of research indicating that most sex buyers are men. Sex buying and exploitation are highly gendered. Thus, in order to truly stop the demand, it is pivotal to address the root causes of the problem instead of simply punishing the behavior and hoping for reformed men.

At the heart of this issue are the overarching cultural prescriptions that men and boys are often encouraged to express emotion in only one way: anger.

This socialization begins at an early age, as boys are scolded for crying and expressing fear or vulnerability. Inversely, girls are often encouraged to express a much wider range of emotion (though, perhaps unironically, they are often discouraged from showing anger).

Coupled with our societal obsession with consumerism and instant gratification, we find young people seeking out ways to purchase goods and services to “help” them deal with these emotions, particularly emotions they do not feel safe expressing or discussing with their peers.

Women and girls are encouraged to lean toward self-help and self-defense, and men and boys toward outlets for them to take out anger.

And remember, as the great Jedi Master Yoda once said, “Fear is the path to the dark side … fear leads to anger … anger leads to hate … hate leads to suffering.”

Yoda’s words have played over and over in my head as I’ve listened to men describe why they decided to buy sex. Before I interview men after they are arrested for attempting to purchase sex, I try to channel my best Dr. Brene Brown and let them know I am not there to shame them.

My colleague and co-founder of The Avery Center for Research & Services sits right next to me and we ask the men to look us in the eyes so we can increase empathy, build trust, and hopefully improve understanding. We begin by asking how and why they ended up there today. Sometimes their answers are brutally honest and vulnerable right away, and sometimes it takes a little more rapport building to get to the core of the issue. 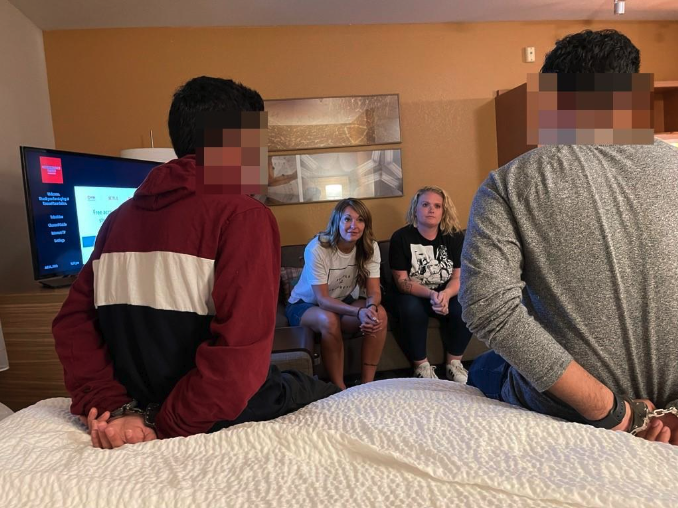 Co-Founders of The Avery Center talking to alleged sex buyers

Regardless of how soon we get there, we hear over and over one word: loneliness. Second to that, men admit they are afraid of being rejected, afraid of relationships, afraid of not being “man enough.”

Many willingly admit they have been experiencing erectile dysfunction and thought purchasing sex would provide a newer, more sensual experience that would correct that problem. Many bring Viagra with them to their appointments to purchase sex.

Megan and I take this opportunity let them know that we have heard these same explanations from other men we’ve interviewed. The look of relief on their faces is something I will never get out of my head; after all, the antidote to shame is empathy.

Many begin to cry, and others sit silently. Megan usually is the one to ask how they can tell the difference between a sex trafficking victim and a “willing” participant that they purchase. Every single man admits there’s no way to know.

The value of “doing the research”

As a researcher, I’d love to say I have longitudinal data from these men we’ve interviewed that shows that they’ve all stopped buying sex and are all now working to improve gender equality not only in their own communities but around the world.

Unfortunately, we don’t have that data (but it’s a dream of ours to one day design a study to do just that!). But I can share an inspiring story that gives us both hope.

After the very first opportunity we were given to interview buyers after arrest, we had the conversation described above as part of a week-long training that ended in a buyer sting in rural Wyoming. In that jurisdiction, the men arrested spent the night in jail after the sting on Thursday.

One man followed Megan’s and my suggestion and went home that weekend and did the research. We know this because on the following Monday, he returned to the sheriff’s office, which is adjacent to the jail where he spent the night just a few days prior, and asked to speak to the Sergeant who oversaw the sting. He did so because he wanted to let the Sergeant know that he “did what those ladies told me to do”; he did the research and felt awful for contributing to sex trafficking. He asked her to pass his gratitude on to us, for being kind and for not shaming him, and for the education we provided him.

Related: What This Anti-Trafficking Expert Says is the Key to Ending Sex Trafficking

I don’t share this story to brag about that one guy. I share it because I firmly believe based on our buyer interview data, our data analyzing the efficacy of “john schools,” that we can only stop demand if we commit to shifting culture.

Do men and boys need to be held accountable? Absolutely, yes.

Can we, as a society, as parents, do a better job upstream so boys do not become buyers? I firmly believe so (and I’m not alone; my friend Peter Qualliotine, founder of Modeling Equality, and my “big brother” Tom Perez of the EPIK Project, among others, agree).

The pathway from boy to buyer

Research has already established that early exposure to pornography is disturbing to children.Flood, M. (2009). The harms of pornography exposure among children and young people. Child Abuse Review: Journal of the British Association for the Study and Prevention of Child Abuse and Neglect, 18(6), 384-400.Copy

We also know that there’s an increased risk for those exposed to pornography at a young age to develop a pornography addiction or compulsion.

Based on the data we have collected from sex buyers, the vast majority of men arrested for sex have struggled with pornography addiction. We are also learning more about the pathway from “boy to buyer” as we continue to gather data.

Related: Couple Arrested for Forcing Women They Trafficked to Sell Content on OnlyFans

In the summer of 2021, Megan and I noticed an alarming trend during one sex buyer sting. The men showing up to buy sex were markedly younger than those we had been used to seeing in these situations for over six years.

Because we had also been following the shifting landscape of the commercial sex trade after the widespread COVID-19 lockdowns, we knew about how popular OnlyFans was becoming. We decided to adjust our interview guide and ask the buyers if they’d heard of it.

The answer? A resounding 90% of the buyers we interviewed shared that they subscribed to content on OnlyFans and one specifically told us “it wasn’t doing it for me anymore, so I decided to do this in person.”

These men were in their early 20s. The pathway of how a boy becomes a buyer is becoming more and more clear. 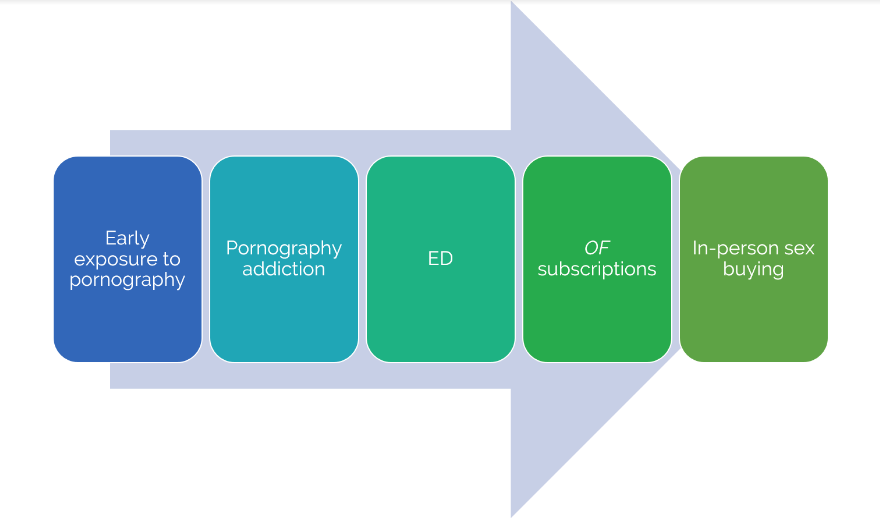 OnlyFans can serve the same purpose as a pornography addiction, but as buyers on review boards admit, it’s better because it’s personalized, made-to-order explicit content.

Buyers use it to “window shop” for individuals on the platform, taking the opportunity to search for content creators in their area to private message on the platform to meet up and solicit for in-person sex transactions.

All of these trends are alarming. With the sharp increase in popularity of the OnlyFans platform, a whole new demographic of (much younger) men are entering the commercial sex market.

First, as other researchers and activists have stated, it is beyond time we start raising our men and boys differently. And I’m not just talking about consent. I’m talking about validating emotions, and encouraging expressing fear and vulnerability so it doesn’t manifest as anger.

Whenever someone asks me what they can do to prevent their daughters from being trafficked, I ask them to shift perspective and instead focus on their sons, or young men and boys in their lives.

In their interviews, survivors have told me repeatedly that men who show up to buy sex are looking for connection, belonging, and acceptance. (Not all of them! But enough for it to come up often in my research.)

Related: The Dark Side of OnlyFans Most People Don’t Know About

Though these trends are alarming, there is hope. Given the research we have on pornography, the erectile dysfunction epidemic among young men, the rise of OnlyFans in popularity and sex buying, we actually can begin to address these issues through prevention, intervention, and ultimately restoration.

Young people at the World Without Exploitation Youth Coalition as well as folks at EPIK Project, Connect Ed, and Modeling Equality, to name a few, are off to a great start.

Dr. Angie Henderson is a Professor of Sociology at the University of Northern Colorado in Greeley, Colorado, and the co-founder of The Avery Center for Research & Services. With expertise in both qualitative research design, she has published over 30 peer-reviewed journal articles, 4 book chapters, and two co-authored textbooks. Her research on how traffickers use substances to control their victims was published in Urban Crime: An International Journal in April 2022, and her research on bottoms—the second-in-command in a sex trafficking operation—was published The Journal of Human Trafficking in January 2022. Dr. Henderson has extensive expertise in studying the experiences of victims and survivors of sex trafficking, as well as sex buyers. In her spare time, she enjoys hiking, biking, boating, and watching soccer with her three children and her dog, Betty White.