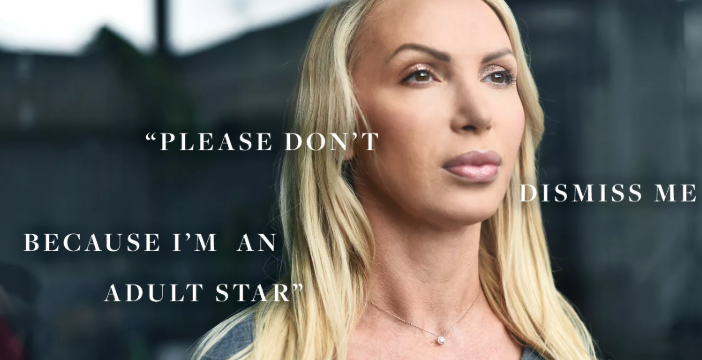 Cover photo by Irvin Rivera for BuzzFeed News. This selected portion of text is a direct repost from a Buzzfeed News piece by Ariane Lange. Click here to read the piece in its entirety.

It’s especially important to give visibility to these reports when they show up in widely-read publications.

She said the attack left her shocked and crying for the first time in her 13-year career.

The suit, provided to Jezebel (link trigger warning) by Benz’s lawyer, alleges that she was non-consensually “struck on the face, head, and breasts hard enough to cause her to bleed” during the shoot two years ago. Benz says she was then pressured into saying that it was consensual in order to receive her paycheck.

Because much of the day was caught on video, Benz thought her criminal case would be “a slam dunk.” But she said the deputy district attorney explained during their brief meeting that he would have to convince a jury that what they were seeing in the video was not consensual. “He said that he couldn’t differentiate what was acting and what wasn’t. I told him, did you see the blood? Did you see the choking? I didn’t agree to that.” When BuzzFeed News informed her that a DA spokesperson said her case was declined “due to insufficient evidence,” she said, “To me, that’s disgusting. There’s tape.”…

Watching unprecedented public support for people who’d faced sexual misconduct [during the start of the #MeToo movement last year], Benz wrote a pleading email to the detective on her case on Nov. 22, 2017. “I’m baffled as to why the mainstream actresses are getting the proper recognition/justice for speaking out against their abusers, yet I have spoken out about this almost a year ago and I have yet to hear back,” she said. “Why am I fighting this hard to prove that I was physically/sexually abused when it’s on film?”

Click here to read this piece by Ariane Lange in its entirety. Trigger warning.

Our sharing of this piece does not imply endorsement of Buzzfeed News nor of every view expressed in this piece.