This post was originally written by Margo Davison with Lisa Thompson, posted on the National Center on Sexual Exploitation’s (NCOSE) website. It has been edited for length.

NCOSE is a legislative, anti-porn organization that works to implement policies that address exploitation, and work to end it. FTND is a nonpolitical organization, while we applaud and support the efforts NCOSE has put forth in exposing exploitation and working to end it.

With operations in 97 countries and 943 locations throughout the world, Backpage is likely the largest online facilitator of sex trafficking in the world. The California General Attorney’s office has reported that during the period of January 2013 to March 2015, “99% of Backpage’s worldwide income was directly attributable to the ‘adult’ section”—where people were openly advertised as available for purchase for sex.

In addition, the National Center on Missing and Exploited Children has reported that 73% of all child sex trafficking cases it’s handled involved the website. Backpage has also been investigated by the U.S. Senate Permanent Subcommittee on Investigations, which released this scathing report on the company in January 2017.

Serving as the main online platform for sex trafficking, Backpage has earned the anger of anti-trafficking advocates and come under tough scrutiny from law enforcement officials across the country. From advocacy campaigns, to legal prosecutions, to attempts to strengthen state and federal laws, many have tried to find ways to stop Backpage. Thus far, those efforts have largely failed.

What Consumer Watchdog’s report reveals, is that this is in no small part due to the behind-the-scenes support Backpage has received from none other than multinational technology giant, Google.

Research by Consumer Watchdog reveals that Google has provided millions of dollars to support Backpage’s legal defense. Much of that legal defense hinges on Section 230 of the Communications Decency Act (CDA).

In 1995, Congress passed the Communications Decency Act in an effort to protect children from Internet pornography. However, the Supreme Court later invalidated most of the law except for Section 230, which gives immunity to “Interactive Computer Service” providers who publish information posted by others. For instance, Section 230 will protect a classifieds site from liability if a person sells someone a broken bike. The person who bought the bike cannot sue the website, only the person who sold them the bike.

In a series of court cases favoring Backpage.com, the courts have interpreted Section 230 of the Communication Decency Act to give third-party hosting sites complete immunity for everything and anything that occurs online. To help ensure Backpage’s legal defense was successful, Google has financed powerful digital rights groups to bolster Backpage’s legal arguments.

The report also details how Google’s lobbying firms tried to prevent the United States Congress from strengthening laws that would avert minor sex-trafficking including the Stop Advertising Victims of Exploitation Act of 2014. In 2013, Google was involved in a letter that was written opposing a bill which was aimed at combating child sex trafficking. Out of the 42 people who signed the letter, 22 were either directly funded by Google or worked at institutions funded by the company. This bill would have held Backpage accountable for the trafficking advertisements on their website.

Moreover, a Harvard professor uncovered that in 2011, Google earned over a billion dollars in revenue from unlawful advertising they had failed to block which included child sex trafficking.

The report by Consumer Watchdog also relates how “in recent years, Google has also started to fund several anti-child trafficking organizations.” While this might be Google’s attempt to look like they are addressing the issue of human trafficking, the fact that they are supporting Backpage’s legal defense, and blocking attempts to reform U.S. laws at the same time is hypocritical to say the least.

Backpage CEO Carl Ferrer himself was arrested in October of 2016 on felony charges of “pimping a minor, pimping, and conspiracy to commit pimping” after a three-year investigation. Two of Backpage’s controlling shareholders, Michael Lacey and James Larkin, were also charged with conspiracy to commit pimping. Once again, CDA section 230 was used as an excuse to release the three men and allow them to continue to profit from Backpage’s sex trafficking.

The stories survivors tell after being sold through Backpage’s advertisements for sex are heartbreaking. A documentary released in February of 2017 titled I am Jane Doe tells the story of several of these women and children who were repeatedly trafficked on Backpage. This film indicates that Google is the biggest donor intervening in the cases filed by sex trafficking victims against Backpage.

Backpage knowingly allows trafficked women and children to be advertised on their website regardless of the many reports of unspeakable crimes being committed against these victims. Amongst these news reports is the story of a 13-year-old girl whose pimp tattooed his name on the girl’s eyelids, a 12-year-old girl who was sold for sex more than 100 times, a 16-year-old in Chicago who was murdered at the hands of her Backpage buyer, and countless other equally horrendous accounts.

How Do We Stop Them?

Amending the CDA is the most direct and permanent way of delivering justice to the many people who have been made victims of sex trafficking though Backpage. Recently, an amendment to the CDA was introduced, which would clarify that law enforcement has the authority to investigate and prosecute websites that facilitate sex trafficking and that it is unlawful for  providers of computer services to publish information from a provider “with reckless disregard that the information is in furtherance of a sex trafficking offense.”

If this reasonable amendment is made, websites like Backpage can no longer take advantage of a misinterpreted law in order to continue sexually exploiting individuals. However, the How Google’s Backing of Backpage Protects Child Sex Trafficking report states that “Google has sought to extend its broad interpretation of CDA 230 . . .while beating back anything that threatens to narrow its scope.” It does not appear that Google is prepared to let sex traffickers lose the protection that Backpage offers them.

As long as large corporations like Google continue to put profit over human rights, Backpage and sex trafficking will continue to flourish.

You can read more about this legislative issue, and others, on the National Center on Exploitation’s website.

Knowing which companies support sexual exploitation is part of the fight against this massive issue as a whole. 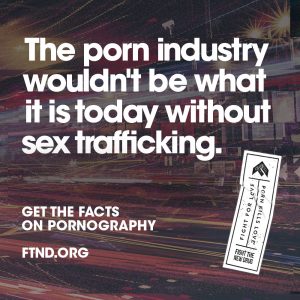 Help stop the demand for sex trafficking by raising awareness on how it happens. SHARE this article to spread the word on how pornography is inseparably linked to prostitution and human sex trafficking.