“He asked me to help keep him accountable, so every day I would just hold up my thumb and he would give me a thumbs up if he had done well or a thumbs down if he hadn’t. He knew that there would be no judgment on my part, just love.”

J: “I kind of knew that something was up with my roommate, but I wasn’t sure how to bring it up. One day we were just talking on the floor of our room. We were talking about dating and treating women properly. I started opening up to him about some of the harder things in my life and he opened up about his pornography problem. I just felt so much love for him and we both cried. He asked me to help keep him accountable, so every day I would just hold up my thumb and he would give me a thumbs up if he had done well or a thumbs down if he hadn’t. He knew that there would be no judgment on my part, just love.”

M: “My brother sat me down on my bed and told me he had something to tell me. He told me he had been struggling with pornography for years, but that he was getting better and that he was healing. He didn’t know it then, but him talking to me about his problem was the beginning of my journey to overcoming my own issue with pornography. Eventually, he became my confidant as I worked through a recovery program. He was my proof that things could get better.”

A: “When my husband and I were just friends, I was suffering from depression. I was talking about my struggles and he told me he could relate. He told me about his struggle with pornography. Since then, we have been completely honest about our struggles. It’s helped us so much. It means there are no secrets and no shame. We focus on solutions and helping each other become better.”

J: “When things were starting to get serious between me and a boy that I was dating, I knew we would have to have a conversation about porn. We discussed how everyone has an Achilles heel of some kind. He opened up and told me that his weakness was pornography. I told him that I had a similar problem in the past. For the first time in a long time, I didn’t feel shame for my history with it. Instead, we were able to discuss how we could set goals and boundaries to work together to get over this problem.”

S: “My friend opened up to me and my boyfriend about a struggle with compulsively viewing pornography. It was hard for us to hear, but we tried not to show that. We tried to just listen and be loving and accepting. We asked some questions about how it had affected him and had a good discussion about it. He told us that he was so grateful that we reacted the way we did.”

K: “When my boyfriend told me he was addicted to pornography, he was extremely honest with me. He told me about the nature of the addiction and the steps he had taken, and was currently taking, to overcome it. He also explained that watching porn had nothing to do with me—it wasn’t my fault he watched it and it wasn’t my job to ‘fix’ him. We discussed what I could do to help him moving forward. He cried, and I cried with him. We both tried to approach it with a willingness to understand and empathize. We continued to have respectful and helpful conversations about it as often as either of us felt necessary.”

J: “I noticed my friend was upset about something. I asked him about it, and he told me about his pornography addiction—that he’d been “clean” for over 100 days and he’d slipped up, and was so upset with himself. I told him I was so sorry it was so hard for him and that I knew he could get past it. I congratulated him on his progress so far and thanked him for confiding in me.”

It starts with us taking away the shame and secrecy in opening up about a very real issue. Join us in fighting for love. 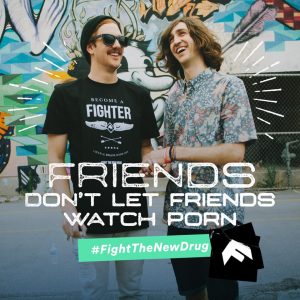