By Fight the New DrugJanuary 3, 2023No Comments

Trigger warning: This article includes frank discussions of racist stereotypes and sexual scenarios that may be triggering. Reader discretion is strongly encouraged.

“Who’s Your Daddy?” Exploring the Images of Black Men in Pornography

Beginning after the Civil War, scientific journals, local newspapers, and best-selling novels began describing Black men as Brutes who were animalistic, destructive, and prone to criminality. One of the most famous examples of the “brute” image was captured in the 1915 cinematic film classic “Birth of a Nation,” which memorialized the supposed dangers that hypersexualized Black men posed to defenseless White women. In one iconic scene, a White actor dressed in blackface played the role of a former enslaved Black man who chases a virginal White woman who had rejected his marriage proposal. Rather than being “ravished” by this out-of-control Black “beast,” she dramatically leaps off a cliff to her death—with her virtue intact.

Historians now recognize such distorted film depictions of Black masculinity as a form of “racial pornography” because the false allegations that Black brutes were, in epidemic numbers, running amok and raping White women became one of the primary rationalizations for the lynching of Blacks—nearly 6,500 in America between 1865 and 1950.

These beliefs continue to have deadly consequences.

Amid his Wednesday night shooting rampage at Emanuel African Methodist Episcopal Church in Charleston, South Carolina—killing nine people—21-year-old Dylann Storm Roof, an admitted White supremacist, reportedly told one survivor: “You rape our women, you’re taking over our country, and you have to go.”

In order to tone down the racist dog whistles, more contemporary terms for Black men include “thugs” and “gangsters” as in videos such as “Thug Creampies” and “Mommy, Me and a Gangster.” There is even a video series entitled “Gangland” in which dark-skinned Black men, who appear to be gang-affiliated, pose menacingly in urban areas ready to pounce on any White woman who takes a wrong turn on the highway and stumbles into the “hood.”

When compared to other racial groups, Black men are more often shown as pimps, predators, and prone to committing acts of aggression.

So, the Black Brute image continues to persist throughout popular culture and this image is especially pervasive in pornography. If you’re still not convinced, consider this—the video series Gangland 86 has been produced for decades because 85 versions of the same video sold well.

Black men are dehumanized and sexualized

For hundreds of years, the contents of Black men’s pants has sparked fear and fascination.

However, these outdated beliefs are on full display in pornography when Black male performers are described as “apes” in films such as “Black Kong Dong,” or as cattle suitable for breeding in “My Hotwife’s Black Bull.” Most of the video covers don’t even feature the man’s face. Instead, Black men are reduced to ginormous Jurassic Park-sized reproductive organs. “No, it’s not Godzilla, but it might be bigger!” screams the text on the video “Big Black Beast 3.” Put simply by Ricky Johnson, a Black male performer: “Our humanity is consistently denied.”

Even more damaging is how pornography eroticizes racial terrorism in the United States.

Here’s what you can do

Here is how it can be done.

Get educated about stereotypes of Black men

In general, we all need to be more educated about how the stereotypes of African American men have affected their educational and employment opportunities. It is especially important to listen to the voices of real Black men who describe the pain of being dehumanized and objectified by these distorted sexualized images that are found in pornography and throughout society.

It’s time to elevate and celebrate models of healthy Black masculinity—ones that don’t reduce them solely to their reproductive organs or judge them by their sexual performance.

Tony Porter, the founder of A Call to Men—an organization that educates about healthy manhood—calls this the “Man Box,” which is toxic for the physical and mental well-being of all men. In June, as we recognize Father’s Day, remarkable Black fathers have too often been erased by the culture. This makes it especially important to push back on pornified versions of Black “daddies” as pimps and predators.

In the wake of global protests after deaths of unarmed African Americans at the hands of police and just days before Juneteenth on June 19, which is the observance of the end of slavery in the U.S., Adult Video News issued their statement: “As a publication and as an industry, we need to do better—and we can.”

But at least their statement got one thing right: “We call for an end to…racist marketing practices and films that rely on stereotypes and ignorance…As an industry, we can no longer deny that these films amplify racism and discrimination.” 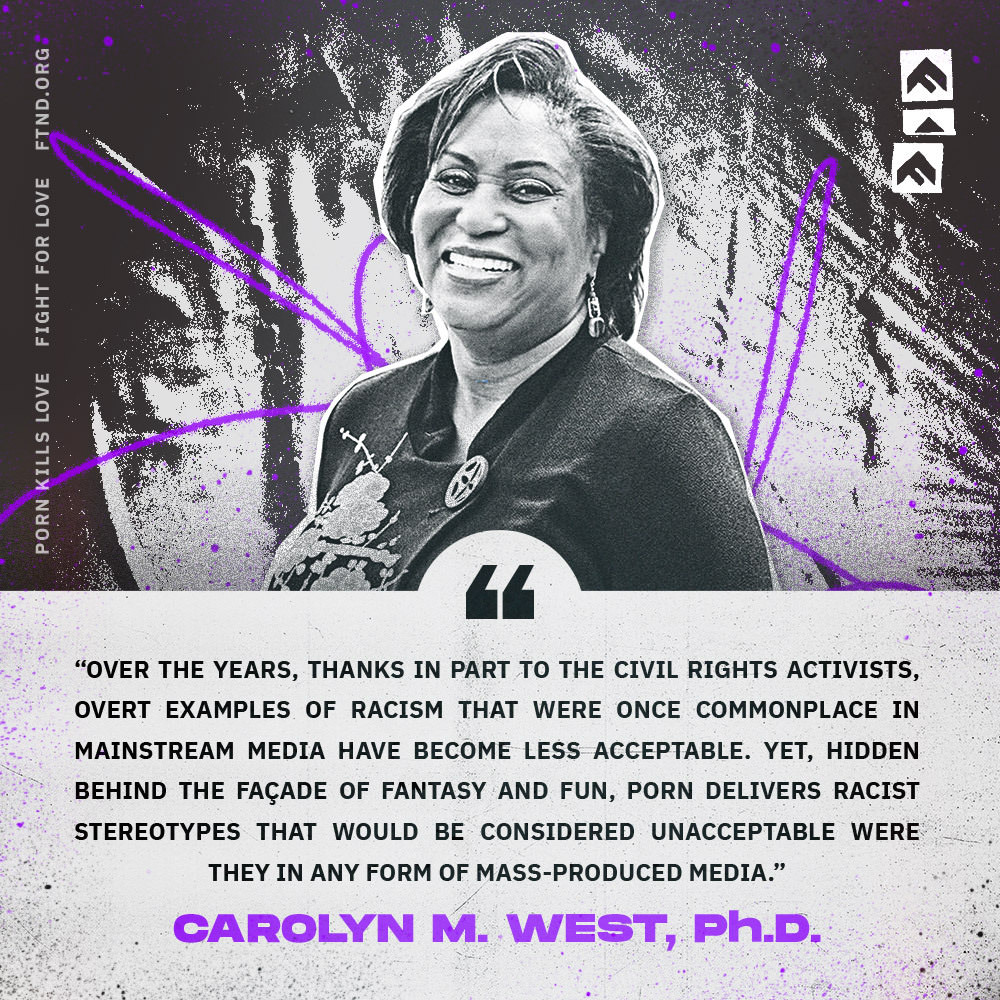 Listen to Dr. West’s interview on Consider Before Consuming, a podcast by Fight the New Drug.