How Can You Tell if a Massage Business is a Front for Human Trafficking?

Instead of offering the normal therapeutic massage services, the report details how the illegitimate parlors offer a variety of sexual favors, for a price—everything up to full on intercourse is offered.

By Fight the New DrugDecember 17, 2020No Comments

There are more than 9,000 illegally-operating massage parlors in America, according to Polaris’ study. The report, “Human Trafficking in Illicit Massage Businesses,” claims there is substantial evidence of workers being victimized, including being held against their will and forced to do commercial sex trafficking in businesses masquerading as being legit massage therapy establishments.

Study finds 9,000 massage businesses in the U.S. are actually brothels

“This is the first comprehensive analysis of these particular businesses,” Polaris CEO Bradley Myles told HuffPost. “I don’t think anyone had an idea there is that many of them. The sheer volume of these businesses is astounding.”

Check out this hotspot map from the Polaris report that shows the areas with the highest concentration of these shady businesses, though you can see that they can be found in every single state in the U.S.: 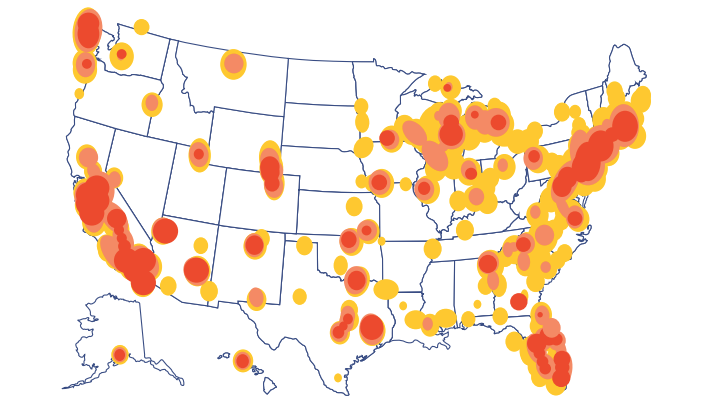 Also astounding are the profits. As reported by HuffPost, Polaris’ research estimates that these businesses, which more often than not are part of an organized criminal network, generate revenue of about $2.5 billion a year.

The report details how trafficking related to illicit massage parlors accounted for 2,949 cases out of the 32,000 that Polaris analyzed in 2017— second in prevalence only to trafficking in escort services.

From Polaris: “It is not known exactly how many women working in massage parlors today are trafficked. The data from the National Human Trafficking Hotline almost certainly does not represent anything close to the scope of the problem. By its very nature, human trafficking is a difficult, if not impossible, crime to quantify with precision. Traffickers operate in the shadows, and the tools they use to exploit victims are such that the victims themselves often do not know that what is happening to them is against the law.”

The women trafficked in massage parlors are mostly:

They are often recruited through fraudulent ads that misrepresent pay and hide the sexual nature of the job. Once there, they work excessive hours and are paid less than minimum wage (or nothing) and told that this is normal. They are threatened with arrest, deportation, or shame to their families if they quit.

Polaris reports that California, Florida, New Jersey, New York and Texas have the highest number of trafficking businesses with the facade of being legit massage businesses (see the hotspot map above). But instead of offering the normal therapeutic massage services, the illegitimate parlors offer a variety of sexual favors, for a price—everything from “hand relief” genital stimulation to full-on intercourse.

Take a look at Polaris’ guide to spotting an illegitimate, and potentially trafficking-ridden, businesses. (Note that this image does not appear in an updated version of the report linked here.) You can also read this Polaris article for more information on how to spot trafficking businesses in plain sight. 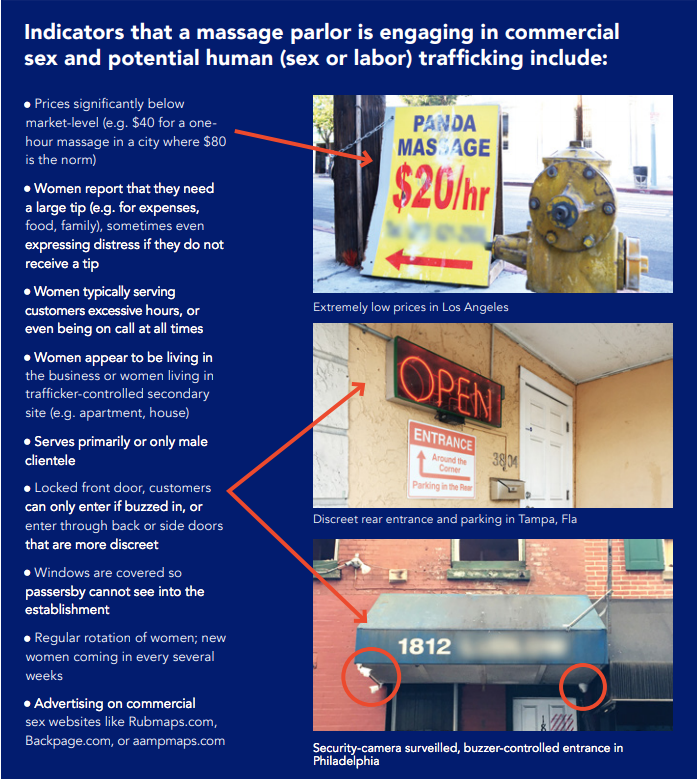 “There is a very proud, strong, legitimate massage profession, and people across the country love to get legitimate massages,” Myles said to HuffPost. “The legitimate businesses are very frustrated that these imposters that have nothing to do with actual massage have weaved their way into the industry and sell sex by exploiting vulnerable women.”

What you can do if you suspect a business

From Polaris’ article, here’s how you can act if you suspect a business to be a trafficking front.

Concerned community members can play an important role in ending massage parlor trafficking, but it’s critical that it’s done in a careful way.

Simply calling police and urging them to “shut down” a business that looks sketchy may not actually have the intended effect. That’s because most of these businesses are part of organized crime networks and if one location is closed, traffickers will simply shift the women to another. Worse yet, such police operations can often result in trafficking victims being arrested and booked on prostitution charges.

You should also avoid entering massage parlors you think may be illicit massage businesses (IMBs), attempting to talk with potential victims, or taking actions designed to draw attention to a particular business (like protesting outside) — all of which can be damaging to victims. Attempting to talk with potential victims can alert traffickers (who are often monitoring the women by camera), and drawing attention to the business can lead the traffickers to pick up and move their entire operation before victims can be identified and provided with services.

If you suspect that a location is an IMB, you should instead call in a tip to the National Human Trafficking Hotline (1-888-373-7888).

To read the entirety of Polaris’ article, click here.

Normalizing trafficking and exploitation shouldn’t be normal. You with us?