By Fight the New DrugOctober 31, 2022No Comments 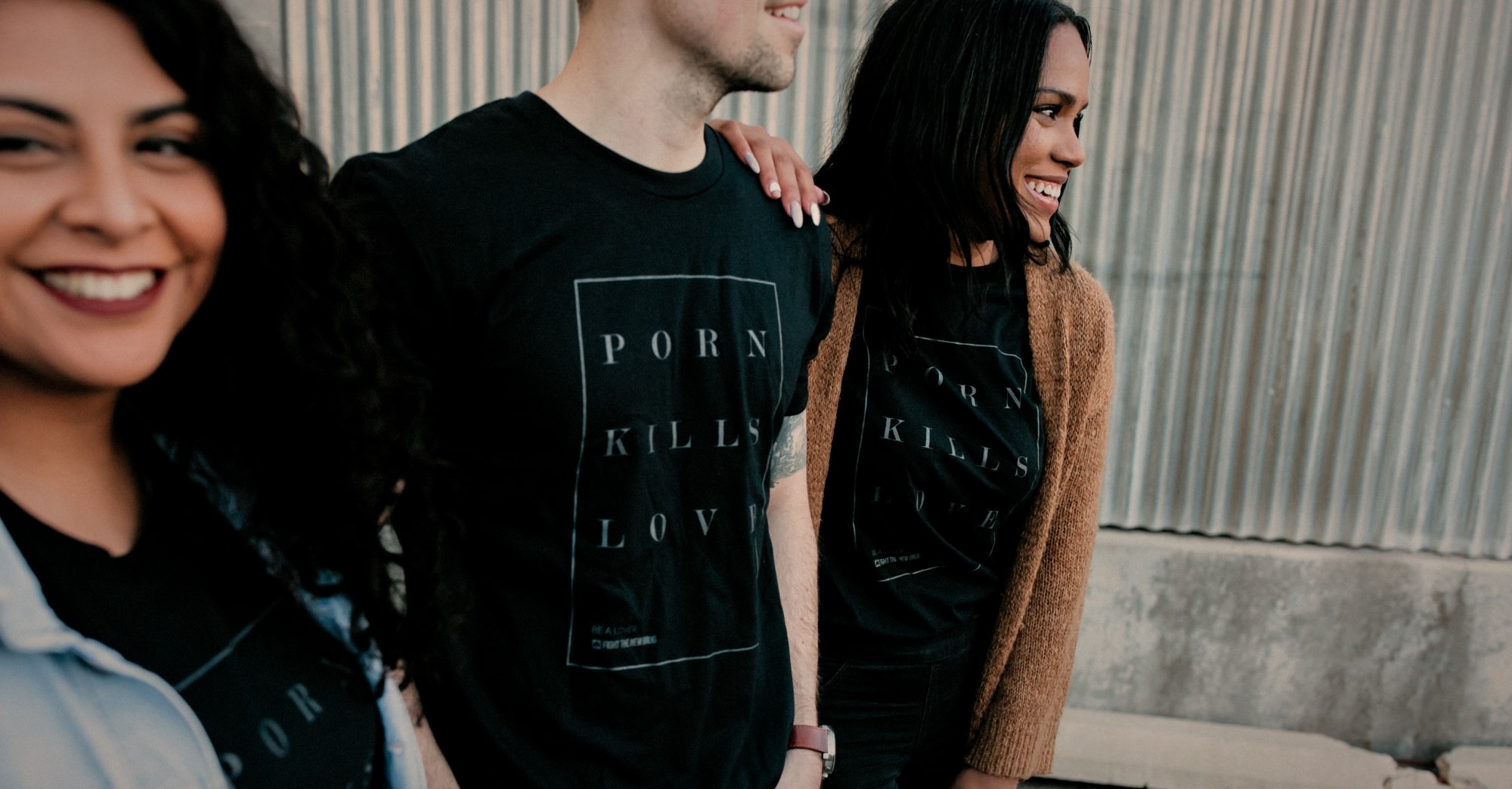 If you didn’t already know, Fight the New Drug (FTND) is a non-religious and non-legislative nonprofit that exists to provide individuals the opportunity to make an informed decision regarding pornography by raising awareness on its harmful effects using only science, facts, and personal accounts.

Related: 10 Things Everyone Needs to Know about Fight the New Drug

The survey was administered to both FTND followers and to a comparative sample from the general population.

Results indicate that while the general public is mostly unaware or misinformed about the potential effects of pornography, FTND resources are very effective at educating people on porn’s potential risks, thereby empowering them to make more informed decisions. 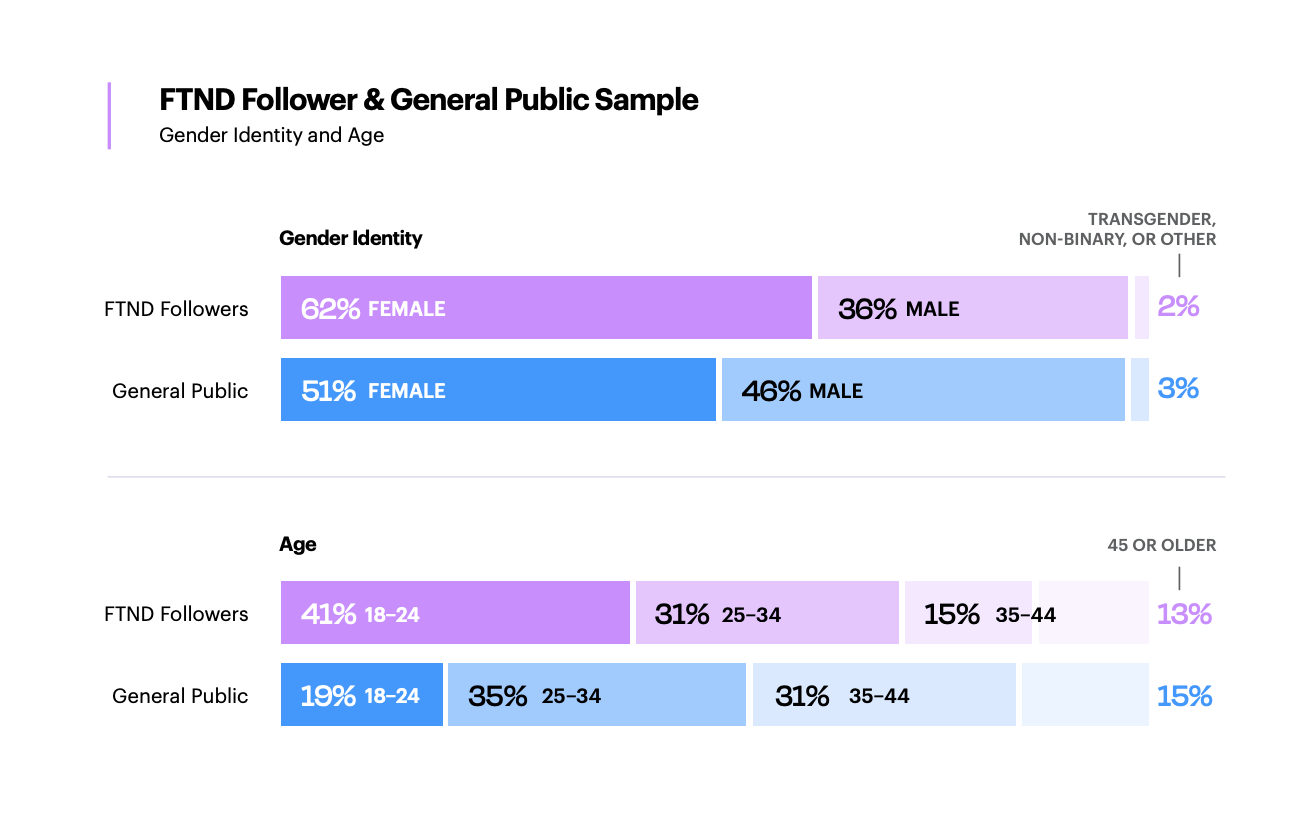 Let’s take a look at some of the more notable findings from our survey.

To read a more in-depth report about our survey, click here.

Related: What You Support When You Buy and Wear Fighter Gear from Fight the New Drug

These findings raise significant concerns about the current levels of pornography risk awareness in the United States. The fact that the average respondent in a national sample of adults was not able to answer even half of the questions correctly shows that there is a troubling gap in most people’s understanding of the level of risk they are assuming when they view pornography, particularly if they begin to view it in frequent and obsessive ways. 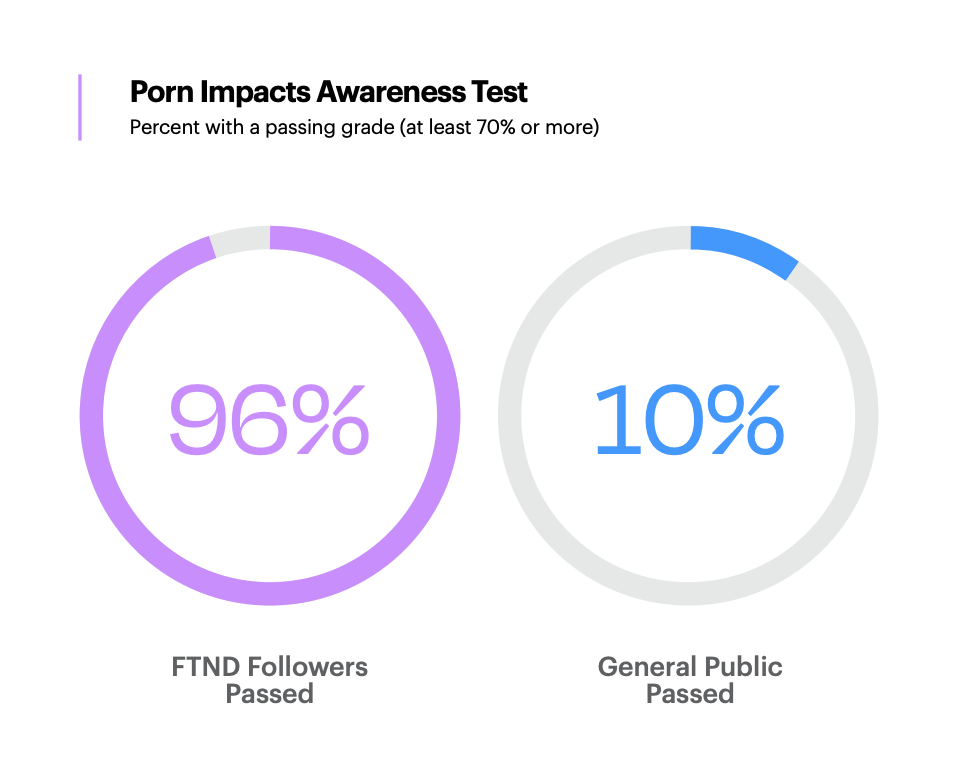 While this is troubling for all people, it is particularly concerning that teens and young adults are making decisions about pornography in their lives while lacking a full understanding of how it may impact their relationships, mental health, and future well-being.

As a non-legislative organization, we are not working to take away the rights of adults who consume legal and consensual forms of pornography. Rather, our goal is to enable people to make an informed decision regarding pornography.

As it stands, it would seem that few individuals are making informed decisions regarding their pornography habits, given that most don’t seem to be fully aware of the potential risks. 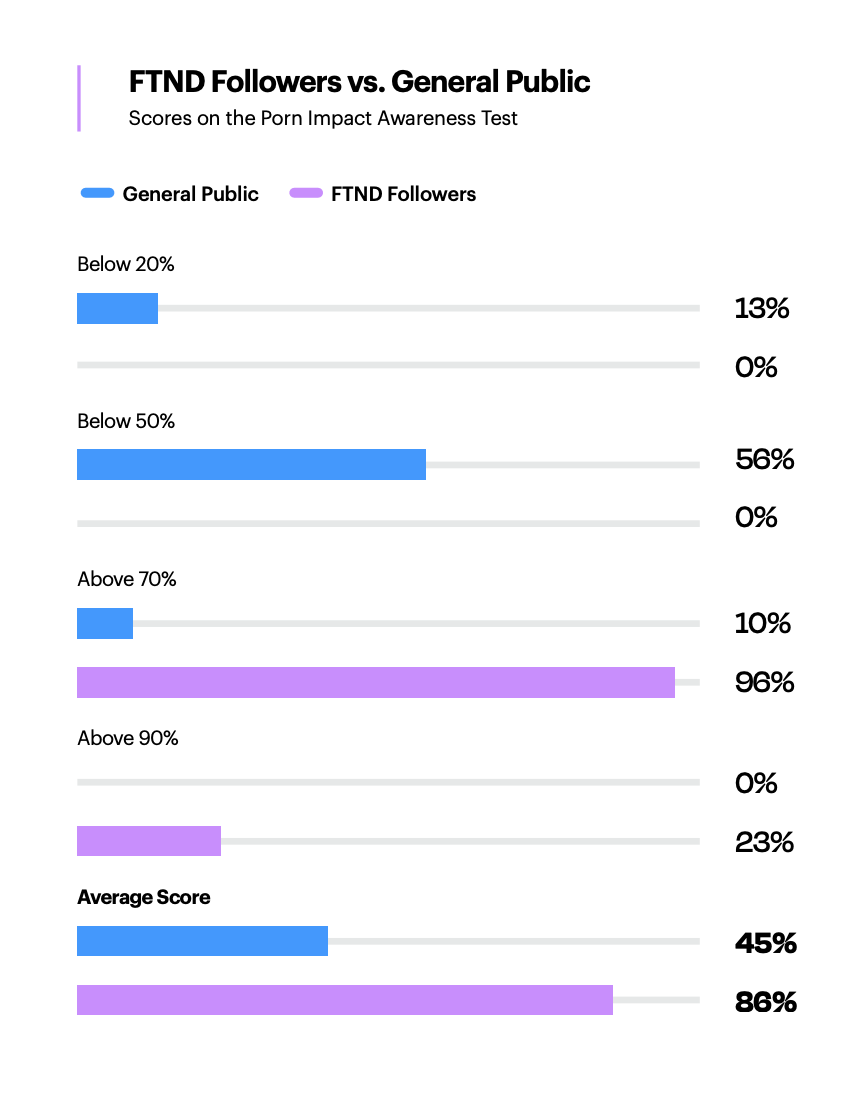 This study also aimed at determining whether or not FTND’s educational efforts are effective in teaching followers about the substantiated harms of pornography. Again, to evaluate this on an overall level, we examined the percentage of questions answered correctly by our sample of FTND followers on the PIAT. 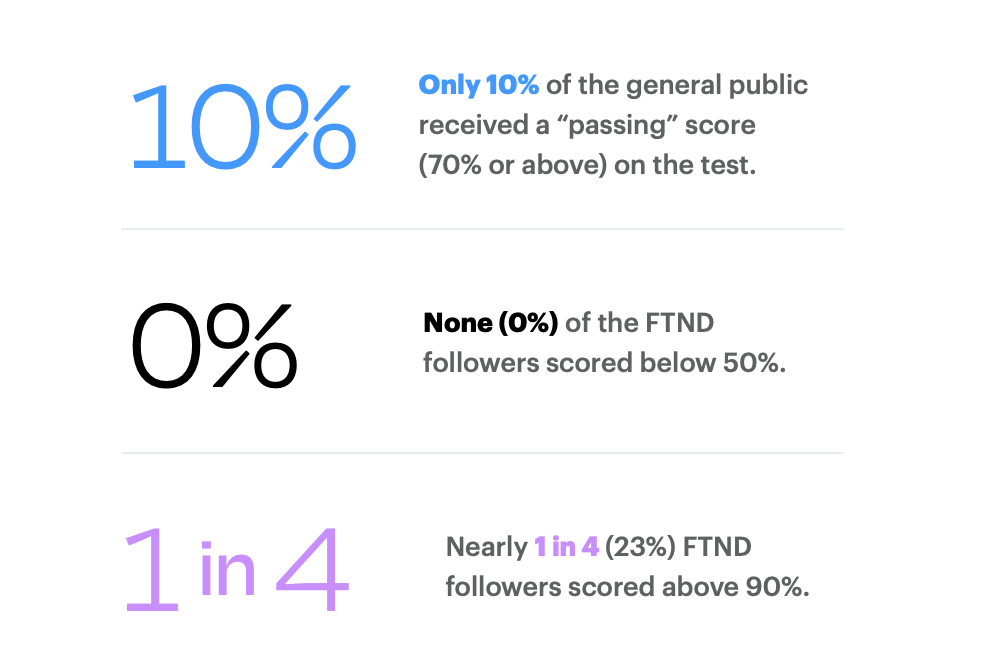 No FTND followers had a fail test score

Related: How Far Your Donation Goes with Fight the New Drug

This means that FTND is producing educational content that is effective yet accessible to a wide range of people regardless of age or education.

This means that FTND is successfully helping to educate a wide range of people in a variety of life circumstances and with different motivations to learn. That’s great news!

Results indicated that FTND is effectively educating followers through a variety of educational approaches, and no single method or approach appears to be significantly more successful than others.

Whether that awareness comes from reading articles on the FTND website, engaging with FTND’s social media posts, or watching the Brain, Heart, World documentary series, it appears that each of these methods effectively teaches followers about the risks of pornography.

Related: 10 Ways You Can Get Involved with Fight the New Drug

To read a more in-depth report about our survey, click here.

While it is concerning to note that the majority of people in the general population seem to be unaware or misinformed about the potential effects of consuming pornography, the findings of our survey also provide strong evidence that FTND’s materials and resources are able to successfully educate a variety of audiences on the risks associated with pornography.

Whether through social media, our documentary series, podcast episodes, or live presentations, these findings suggest that FTND’s educational materials successfully speak to a wide range of audiences with a wide range of needs and beliefs.

As a result, FTND is successfully achieving its mission to provide individuals the opportunity to make an informed decision regarding pornography by raising awareness on its harmful effects using only science, facts, and personal accounts.

If you’d like to support our efforts to continue educating individuals around the world, please consider becoming a monthly supporter with Fighter Club, or making a one-time donation.