If there has ever been an example of porn’s tight link to real-world sexual exploitation, it’s Rose Kalemba’s story.

You may have recently heard on social about Rose’s nightmarish experience and the resulting years of exploitation, but here’s a rundown.

In 2009, the summer she was 14, Rose Kalemba says she went for an evening walk around her quiet Ohio neighborhood.

Out of nowhere, a man approached her and forced her into his car at knifepoint. This man along with two others took Rose to a house where she was reportedly serially raped and physically abused until morning. One of the men filmed the attack.

Rose explains how they stabbed and beat her, eventually threatening to kill her. She moved in and out of consciousness over the course of 12 hours. In the morning, she gained enough mental awareness to talk the attackers down from ending her life. They drove her back towards home and dropped her in the street.

She had barely lived through a nightmare, yet many in her extended family and social network accused her of leading the men on, of “asking for it” somehow. This social pressure to explain and justify one’s own rape experience is enough for a victim to deal with—it led her to attempt suicide the day after being released from the hospital.

But her story didn’t end there.

In talking to Fight the New Drug about her story, Rose said:

Every day, she had to live with the aching anxiety that everyone she met had seen her worst nightmare on video. “Had they seen it? Were they aroused by it? Had they gratified themselves to my rape?” she asked herself whenever interacting with a new stranger.

“At best,” she told us, “I was a cautionary tale that parents warned their kids to stay away from lest they end up like me—as if I was a contagious disease. At worst, I was victim-blamed for my own assault and called every degrading name you can think of.”

Can you guess Pornhub’s response? Rose says she received no reply to her hundreds of emails, and the videos stayed live on the site.

But have they, really?

Despite this claim, stories about the site hosting non-consensual videos of abuse surface continually. Rose is far from alone.

The industry and the elusive issue of consent

That’s the problem—Pornhub might have a “non-consensual content removal system” that they advertise in cases like this to save face, but in reality, they can hide behind claims of protecting free expression and seemingly stay ignorant on what is consensual and what isn’t.

In response to the question of why videos with titles like those of Rose’s rape remain active on their site—“extreme teen abuse” and “teen abused while sleeping,” for example—Pornhub stated: “We allow all forms of sexual expression that follow our Terms of Use, and while some people may find these fantasies inappropriate, they do appeal to many people around the world and are protected by various freedom of speech laws.”

A video called “drunk teen raped while sleeping”—even if the actress is over 18 and signed on willingly to the filming, though that can be incredibly difficult for the consumer to confirm—normalizes real scenarios of exploitation and abuse. This content presents destructive situations like what happened to Rose into a sexual fantasy for others to use for personal pleasure. So when someone sees an actual video of an actual assault, they’ve been desensitized to the real violence of it, and it has become just another rape fantasy video.

See how this perpetuates exploitation, objectification, and insensitivity to real victimization?

And it’s not just minors who are victimized by porn’s “fantasies.” It’s babysitters, makeup artists, rideshare passengers, people of minority ethnic groups, people with disabilities, those in the LGBTQIA+ community, and the list goes on and on.

Back to Rose’s story. Here’s what she wants everyone to know and take away from her story: 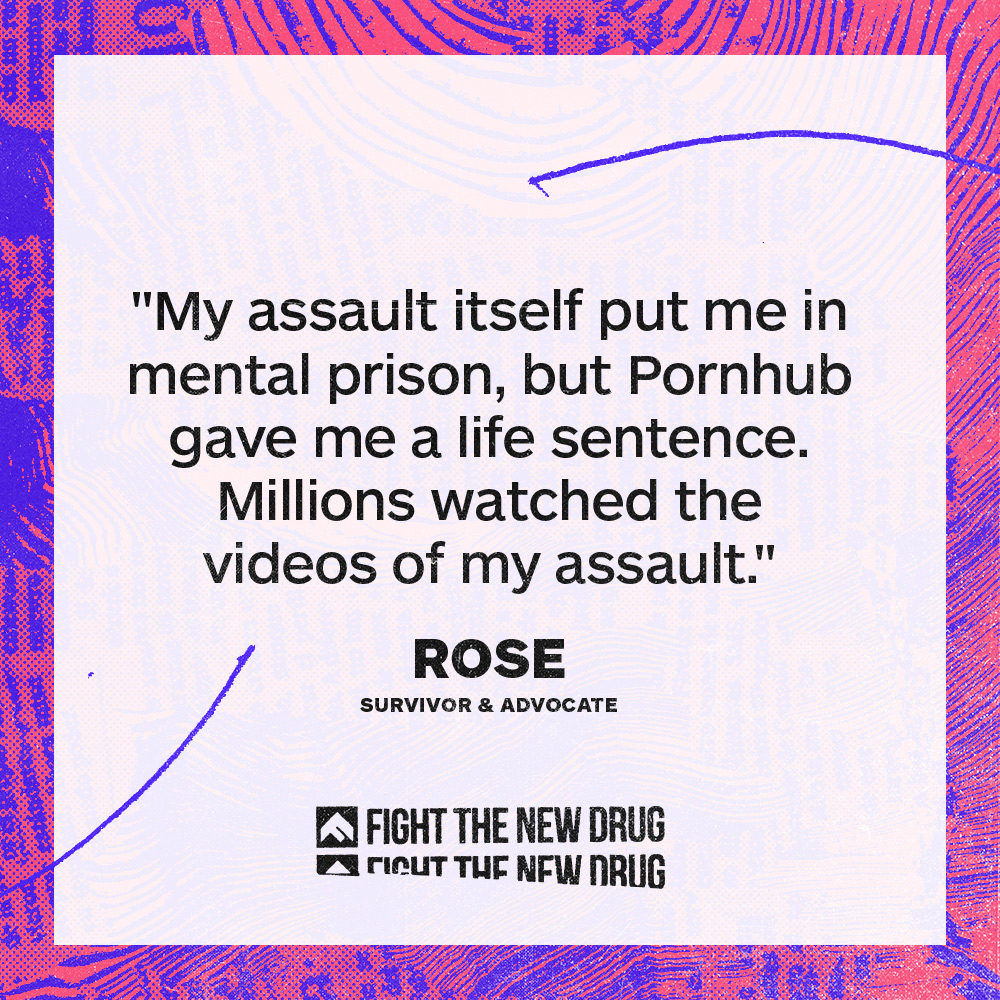